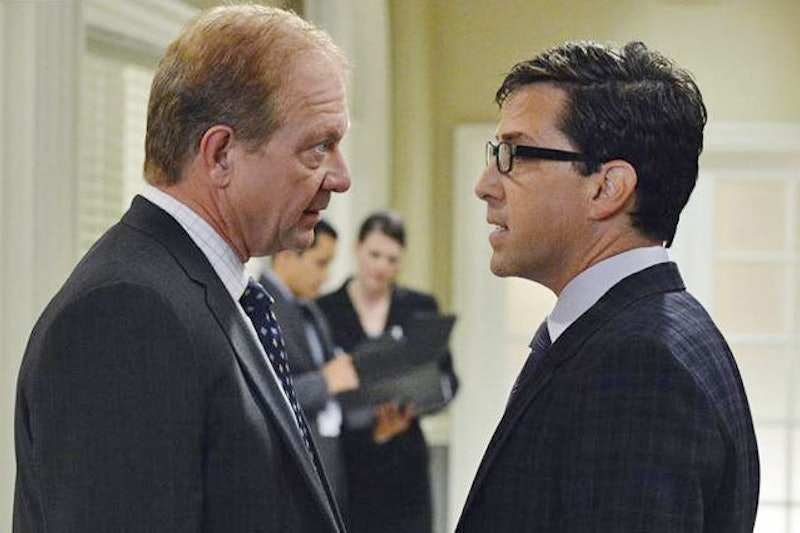 Ripped clothes, surprise makeouts, and a murder topped the list of unexpected twists in Thursday night's most recent episode of Scandal. After four weeks of uneventful episodes, this week's addition marked the biggest tearjerker event in the show's history—the murder of a main character. Press Secretary James Novak was shot to death— and the entire Scandal world was turned upside down.

While Scandal fans were floored to see Jake actually shoot James in the first five minutes of the episode, actor Dan Bucatinsky and the rest of the cast of Scandal were just as surprised to see the beloved character removed from the show.

"I got a call from Shonda. My heart was in my throat, and I thought, "Maybe she's calling with good news!" So I pulled over, and she said, "We tried everything. We talked about every possibility to try to save James, and we didn't, so James has to die," Bucatinsky told E! News in an interview.

While everyone is grieving the loss of this great character, Bucatinsky acknowledged that Jame's death logistically had to happen sooner or later because his information posed a huge threat to the administration.

"I feel like James' willingness to try anything to [bring justice to the murder of Daniel Douglas], in storytelling terms, there was really no way to continue with that level of danger given what was around him and given how many people knew what he was doing and how many people knew he was Publius, there was really no way to get around it without some big, big story move,"

As we say goodbye to one of our beloved characters, we must also look forward and anticipate what James' death means for the rest of the show. Here are five ways his unexpected death will change Scandal.

1. The real cause behind James Reston's death may never be known.

The reason for James Novak's death was to conceal the truth about James Reston's murder. Now that Novak is dead, the truth about Sally Reston killing her husband will die along with Novak, giving her free reign to run for President without any threats to her campaign. The only people who can blow her cover are Cyrus and David Rosen. But will they ever rat on Sally? If Cyrus spoke out, his career would be on the line too because he was the one to help Sally cover everything up in the first place. If Rosen snitches, B613 will be on him like white on rice. Only time will tell.

Cyrus' entire life is clearly in ruin right now. His husband is dead and he is left to not only grieve the loss, but also take care of their daughter and run the President's reelection campaign all at the same time. Will he crack under all of the pressure? We will find out.

3. Who will be the new press secretary?

With James gone, there is no working press secretary, which is clearly a problem considering the president is in the middle of his reelection campaign. So, either Olivia Pope will step into that position or it's time to introduce a new character into the mix. A new love interest for Cyrus? Too soon, too soon.

Cyrus is furious and will most definitely seek revenge on who is responsible for James' death and act spitefully, which may lead to very destructive decisions. Will he find out from Olivia who really killed James? We hope so.

If there weren't already plenty of reasons to tune in for the season finale, here are another set of problems for Olivia Pope to handle.