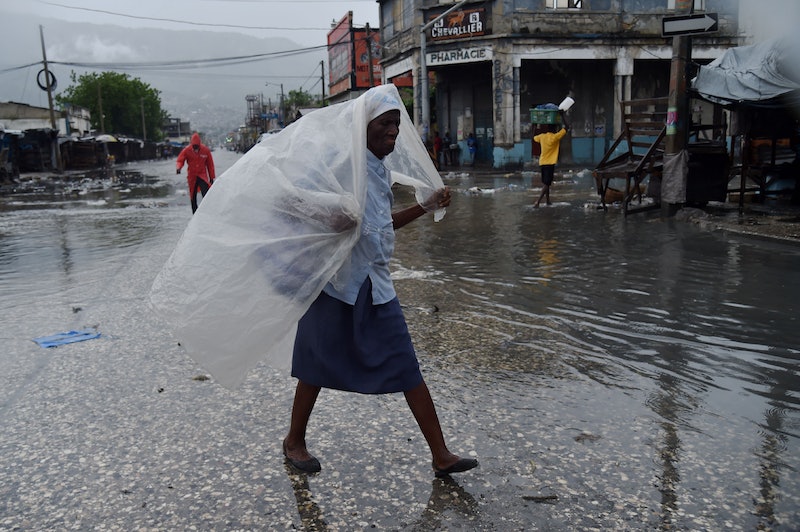 Hurricane Matthew has been ripping through the Caribbean for several days, taking a heavy toll on Saint Vincent, Columbia, and Haiti as it careens on its path toward Cuba and the United States. The extent of the damage done in the Caribbean will not be known until the storm passes, but as of Tuesday, flooding, destroyed houses, fallen trees, and the loss of three lives had been reported. Haiti is the poorest nation in the Western Hemisphere, and was still grappling with the aftermath of the 2010 earthquake when Matthew hit. Many want to know how to help Hurricane Matthew victims, and doing so effectively requires knowing what not to send to the areas impacted by the storm.

When a natural disaster strikes, we hear reports about the devastating loss of pretty much everything incurred by the people subjected to it — housing, clothes, food, water, children's toys, and so on. This can lead us to think that just about anything we could send would be helpful, but that's actually not the case. Some types of donations can disrupt disaster relief efforts by taking up too much space or requiring too much of volunteers' time to disseminate. It's generally best to avoid sending the following types of items.

Used clothing is a very popular item donated to disaster relief areas, and one of the most commonly problematic because of the volume received and the time it takes volunteers to sort them. And if clothing doesn't get sorted and stored somewhere quickly, the elements could destroy it, making it just one more thing to end up in garbage piles.

When houses, markets, and crops have been destroyed, people impacted by natural disasters are often hard-pressed to find food. But shipping boxes of nonperishable food is not as helpful as it seems. It takes a lot of time for volunteers to inspect food items to ensure they have not expired and that packages have not been damaged, which would pose a health risk to the people consuming it. Disaster relief organizations are better prepared to ensure the safety of food items they obtain, and they can sometimes work with suppliers near the disaster site to get food where it needs to be. This is better for the area's economy, not to mention more organized.

Access to clean drinking water can be a big issue following a natural disaster. But the Center for International Disaster Information explains that sending bottled water is way more expensive and inefficient than investing in water purification systems in the affected area. The latter can hydrate far more people for far less money, and it doesn't leave behind a bunch of plastic bottles.

You might think donating some over-the-counter medications or medical supplies to a disaster relief area is harmless, but it's not, according to the World Health Organization. Medicine is medicine, and it comes with risks. It is not at all safe to randomly hand it out to people, and these donations will just end up being disposed of. Same for prescription medications.

When thinking of the children impacted by natural disasters, we long to provide them with any bit of comfort we possibly can. Sending a teddy bear or other toy is a totally understandable desire, but you have to keep in mind that many, many other people have the same idea. A disaster site could end up cluttered with toys instead of items they need more. There are charitable organizations which distribute children's toys, such as K.I.D.S., and they have a better idea of how many are actually needed.

Unless specific items are being requested, it's generally best to give cash donations to established, well-rated charities that know what is needed and are experienced at obtaining and distributing necessary items in an area impacted by a natural disaster. If you don't have much money, but have some things you can get rid of, consider having a yard sale or posting them on eBay, then donating the money you get. And donate wisely — use sites like Charity Navigator and GuideStar so you know your money is going to an organization with a record of effectiveness. In general, your monetary contribution will be more helpful to Hurricane Matthew victims than food, water, or your old stuff.