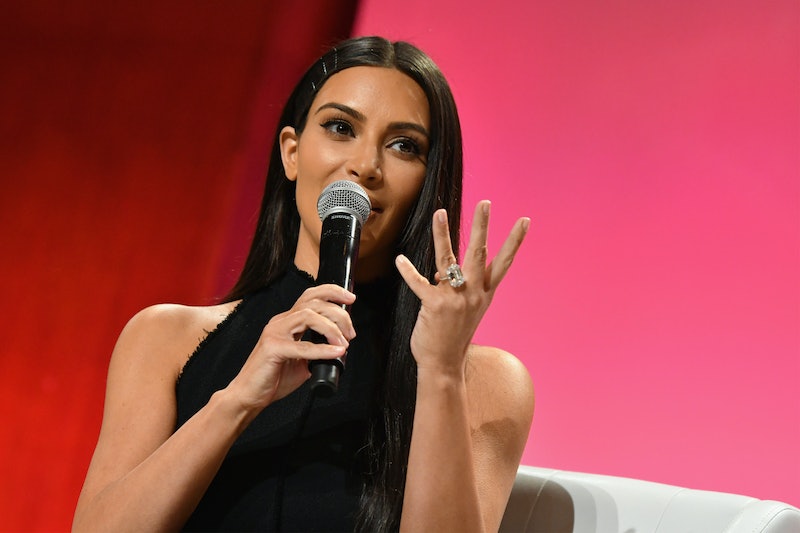 In the wake of Kim Kardashian's scary robbery in Paris, questions are still arising about the details of the incident. What we know so far is that Kardashian was in her luxury apartment in Paris when masked robbers broke in and reportedly stole a massive diamond ring Kanye West recently gifted her, which was worth around $4.9 million, and a jewelry box worth over $5.6 million. Now that Kardashian is safely back in NYC with her family, fan might be wondering with a theft of that magnitude, if Kim Kardashian's jewelry was insured? (Bustle reached out to Kardashian's rep about the topic, who had no comment.)

Unfortunately, jewelry theft is not unknown to the Kardashian family. Back in 2014, Khloé Kardashian had $250,000 worth of jewelry stolen from the home she shared with Lamar Odom. At that time, TMZ reported that the family was convinced it was in inside job based on there being no evidence of forced entry into the home. So they have some history with this and one would think they'd have made moves to prevent more loss in the future. Based on this fact and the sheer worth of the jewelry they own, I would think Kardashian probably has her most expensive jewelry insured, especially since she travels with it so often.

In order to understand more about jewelry insurance, Complex spoke to Robert Lejman, who is president of Argyle Insurance Agency, a company specializing in jewelry insurance. When reports of the stolen jewelry's worth surfaced, Complex asked if these amounts could be correct. Lejman said,

"If they did have insurance on it, they would usually insure it at what they call an agreed value policy. 'Agreed value' means that whatever number you insure it at, that’s what you’re going to get out of the settlement, versus what’s called a replacement policy, which means that they’re not going to give you the actual dollar value, but the insurance company will go to a supplier or jeweler they know to try and replace the piece."

So, if she had a Cartier ring and had a replacement policy, she would go back to Cartier to have it replaced, as the insurance claim would pay Cartier. But if she had an "agreed value" policy, she would receive whatever value she insured the ring at and be able to do whatever she wanted with the money. This latter fact has unfortunately spawned various conspiracy theories that the robbery was staged for insurance fraud, because you know, the internet always delivers the worst.

In this traumatizing time for her and the family, they are probably not all too worried about insurance claims and all that, but it's important to remember that, like us, many of those jewels held sentimental value for Kardashian that can never be replaced.