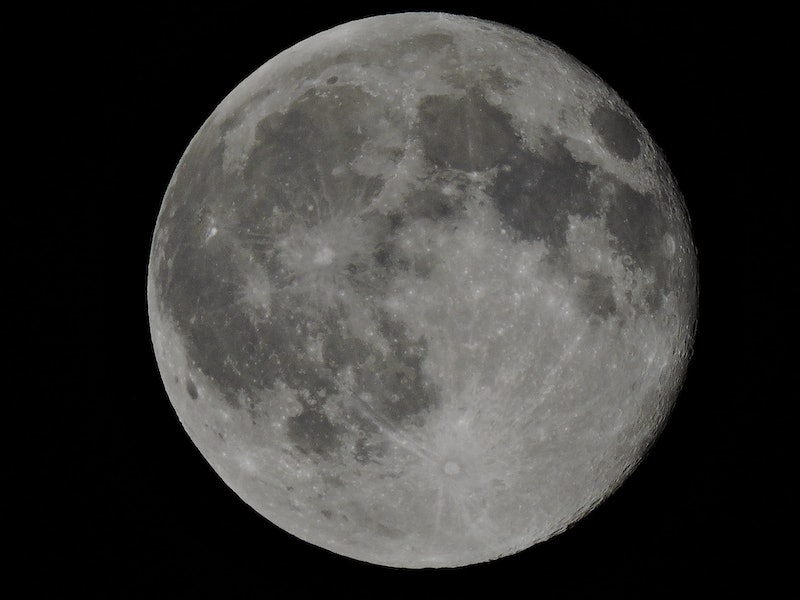 There is nothing like a crisp, clear fall night for some peaceful stargazing, and the perfect opportunity is right around the corner. A supermoon will brighten our skies on Oct. 16, and you don't even need a telescope to enjoy the lunar event. What does a supermoon mean, exactly? We have already experienced three supermoons so far this year, but if you happened to miss these larger and brighter moons, I highly recommend you take note of the one on Sunday, Oct. 16.

The catchy term "supermoon" was coined by an astrologer, not an astronomer, over 30 years ago. According to EarthSky, Richard Nolle defined it as "a new or full moon which occurs with the moon at or near (within 90 percent of) its closest approach to Earth in a given orbit." The moon orbits Earth in an elliptical shape, meaning that at some points in its 27 day circumnavigation it is closer to earth and at some points it is farther away. When the moon is at its absolute closest, that is called "perigee." The term comes from the latinized ancient Greek for "close around the earth."

A supermoon occurs when the moon is at its closest point to perigree, and is in its fullest phase. So, in brief, when the moon hits your eye like a big pizza pie — that's a supermoon! Before the term became common tongue, astronomers referred to the occurrence as "perigee new moon" or "perigee full moon" (just not as fun to say). Technically, the supermoon we are seeing in October is a near perigree full moon, with the perigree full moon happening the following month (so close!). The Oct. 16 moon will still be a mighty fine sight, as supermoons appear around 30 percent brighter and 14 percent larger than a full moon at its farthest point in orbit.

On average, there is between four and six supermoons annually. The ones that occur in the winter are by far the largest, since the orbit of the moon grows even closer to the earth, as we near the sun in our orbit each December. Stay tuned for the super moons on Nov. 14 and Dec. 14, because those will be even bigger and brighter!

If you are worried about these close moons causing floods, don't be. According to Space, a full moon can cause slightly higher tides, however the addition of a supermoon will change them less than an inch, if at all. (The supermoon will also not affect your period, make you crazy, or turn you into a werewolf. Phew!) So go ahead and bask in the super moonlight this October and don't forget the hot cocoa!