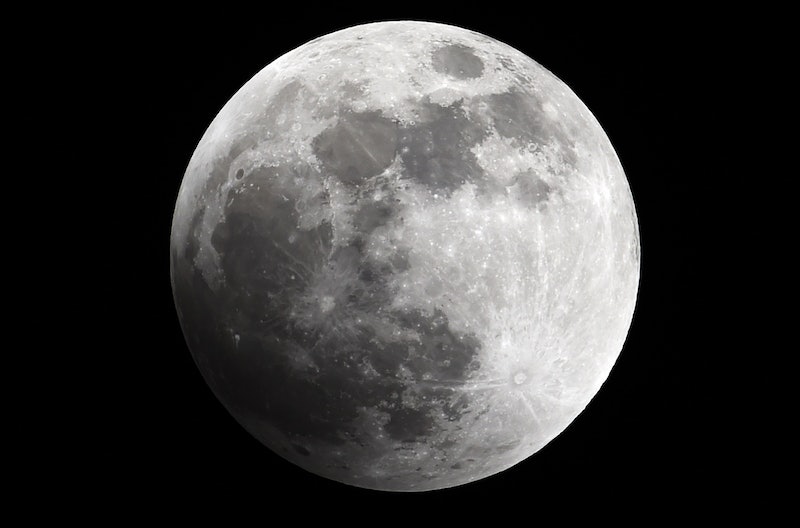 Star-gazers and astrologers alike will agree that things have got pretty interesting up there recently. We had the hype surrounding a potential new zodiac sign last month; we've had a bunch of eclipses; we had a Black Moon a Harvest Moon; and now, there's going to be a supermoon in the sky. So when is the supermoon, exactly? One thing's for sure: You definitely don't want to miss this spectacular sky show.

According to astronomy site Earth Sky, the term supermoon was first coined was first coined by astrologer Richard Nolle 30 years ago; he described the phenomena as “a new or full moon which occurs with the moon at or near (within 90 percent of) its closest approach to Earth in a given orbit.” Nolle's definition means that a supermoon has to be 361,524 kilometers (224,641 miles) from our planet to be considered "super"; this closer proximity to earth is what makes the surface of the moon appear wider and larger to us (and therefore gets people so excited to see it).

The best part about supermoon-spotting is we don't have to wait too long to see one: The next supermoon is coming on Oct. 16, and it's going to be 14 percent larger and brighter than a regular ol' moon. Exactly when the moon rises on Oct. 16 will depend on where you are, but for reference, in New York, it'll be at 6:58 p.m. EST. The sun will have set just about half an hour earlier, at 6:13 p.m. EST.

There are actually six supermoons in 2016, so if you miss this one, no biggie; you've still got a couple more to go. The supermoon in November 2016 is actually going to be the closest supermoon of the year.

One interesting side effect to the supermoon that you may notice if you live near the ocean is that the tides will be larger than normal. It's long been proven that the moon's gravitational force changes the flow of the tides on Earth, and regular full moons and new moons combine with the sun to create larger-than-usual tides. But closer-than-normal full moons have also been proven to elevate the tides even more (although it's not likely to cause flooding).

Each month, on the day of the new moon, the Earth, moon and sun are aligned, with the moon in between. This line-up creates wide-ranging tides, known as spring tides. High spring tides climb up especially high, and on the same day low tides plunge especially low.

If you're superstitious, you may be looking out for strange human behavior on Oct. 16, too; some people believe that changes in our gravitational force can affect us just as much as it affects the sea. But for everyone else, you'll just want to be sure you're in the perfect spot to take in the views or capture this moon on camera.