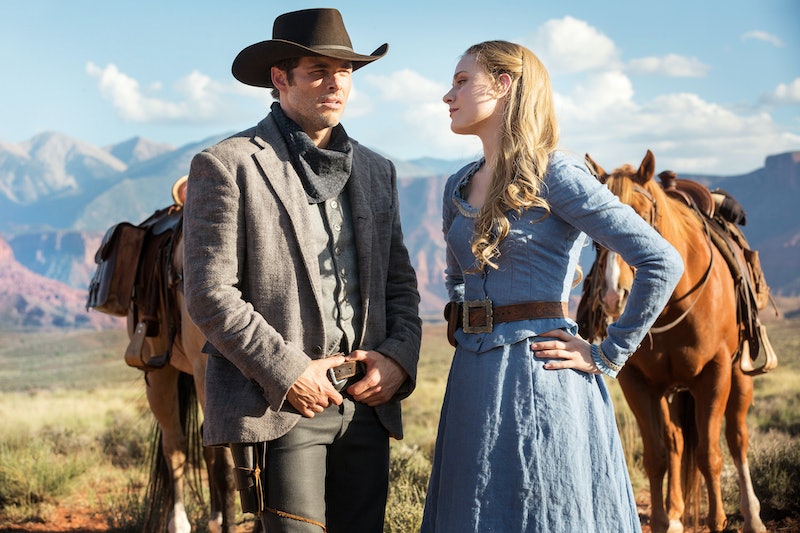 HBO’s new series Westworld explores a Wild West themed amusement park of the same name, where humans can live out their most twisted fantasies. The artificial world is home to androids who can assist “newcomers,” or guests, in finding the vice of their choice, from adrenaline, to sex, to gambling, to violence, and the robots are at the humans' disposal. Guests cannot be hurt and robots can’t remember a thing. At least, that was the case at the beginning of the episode. But by the end of the pilot, it seems that Westworld is heading towards a "critical failure," something that apparently hasn't happened in 30 years, and already fans are trying to figure out what could be causing it this time around.

In the pilot episode, viewers learned that robots are malfunctioning after a technical update that added reveries, or movements and speech based on memory. This seems like a good idea at first because it makes the robots appear even more lifelike. But, when you consider that these robots are often used to play out sex and murder fantasies, there are some serious risks associated with that. And, that is not the only issue to arise after the update: some robots are turning violent or beginning to question their reality.

For example, a robotic bandit meant for a heroic guest to kill goes awry and begins to torture fellow bots in front of guests, while Dolores’ father begins to question things and tap into dangerous memories from previous roles he held at Westworld. The reveries made him remember that he once played the sheriff and was at a time part of a murder mystery game — leading him to realize his current reality is not what he thought it was. Of course, both robots are decommissioned. But, when Dolores swats a fly (which she previously didn’t notice) at the end of the pilot episode, we know a critical failure could be on the horizon at Westworld.

Here are some of the theories out there about what, or who, is behind the robots’ evolving behavior on Westworld.

The Man In Black Is Reprogramming Robots

The Huffington Post addressed a theory that the Man in Black may not have attacked Dolores in the way we previously thought. He may not have raped her in that terrifying barn scene, but actually reprogrammed her in a quest to cause the next big critical failure.

The Man In Black Is Doing Something, But We Don't Know What

There’s More To Dolores Than Meets The Fly

She’s the oldest bot, after all. This means she has the most memories and can tap into the most reveries. And, her swatting the fly was an indisputable piece of foreshadowing — though we don’t know what it is foreshadowing just yet. I am also curious about Dolores and the Man in Black’s past. Why is he so obsessed with her, and has he been going after her for the past three decades? If so, he's in serious trouble if Dolores starts to remember her past.

This may be a bit of a stretch, but the murderous robot decommissioned in the first episode was pouring milk over fellow robots that he has slain. He tells the humans watching the slaughter that the milk is not for them, and tells one robot he is washing with milk that he is a growing boy. Aside from being creepy, I wonder if this is doing something to reset the robots or shows that the killer remembers part of his creation. He had also poured milk over Dolores’ dad the previous night, and we saw what happened to him.

I also saw some symbolic juxtaposition between the milk being poured over murdered androids and the robot being made a few scenes later, as it is being bathed in a white substance that resembles milk. Perhaps there is a connection between the two and that murderous robot is more significant than we think.

Some Employees Are Actually Robots

The same article in The Huffington Post suggests that some of the supposed humans we have been introduced to are actually robots. The two biggest suspects are Bernard Lowe, Robert Ford’s right-hand man played by Jeffrey Wright, and Theresa Cullen, played by Sidse Babett Knudsen.

Reddit user shelfdog noticed that Theresa Cullen leaves the room just before Ford and Bernard examine a robot. This is suspicious because, if she had stayed in the room, it may have been revealed that the commands they use on the robot would have also worked on Theresa.

Ford Is Causing The Critical Failure

Another Reddit theory mentioned by the Huffington Post, from user twbrn, suggests that Ford, played by Anthony Hopkins, is purposefully causing the robots to malfunction. Twbrn theorized:

“I think Ford is deliberately trying to introduce glitches in the hopes of making his robots evolve. We're told how he keeps pushing things, and the last code he introduced was what enabled them to start exceeding limits. I think this dude sees himself as the god of artificial life."

This previous critical failure may be a nod to the Westworld film, which was released 43 years ago but also set in an unspecified future, as Gizmodo also noted, among others. Many theories suggest that the malfunction portrayed in the movie may hold clues about this one, so you should know that in the original Westworld, a sort of virus spreads around the robots in the park that causes them to malfunction. One robot, Gunslinger, becomes particularly bloodthirsty. Does that mean there is some sort of virus taking hold on the series? And is Gunslinger a parallel character to the Man in Black? Does that mean the Man in Black is a robot?

With just one episode, viewers have so many questions and I can’t wait to see how the answers unfold throughout the rest of this season of Westworld.