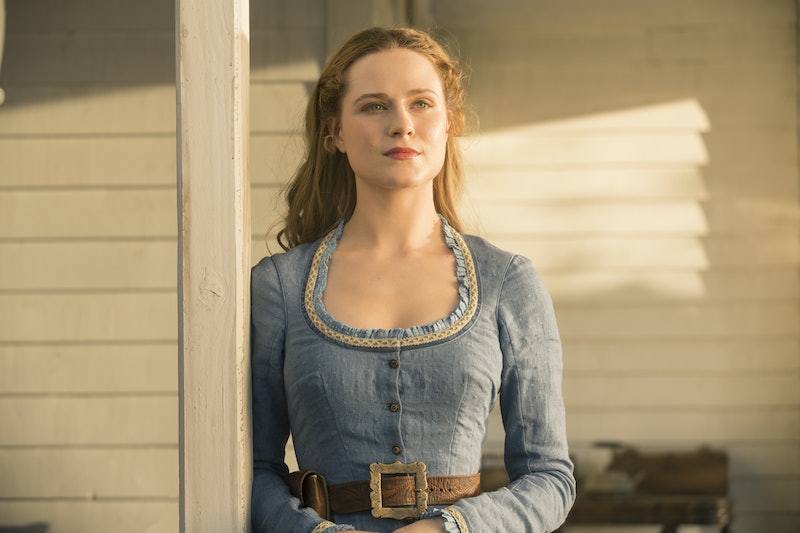 With HBO's Game Of Thrones ending in only two more shortened seasons, it's clear from the lavish and thrilling Westworld series premiere that this new and expensive sci-fi drama is supposed to be the network's successor to their popular fantasy show. Westworld has a lot in common with Game Of Thrones, from its dozens of characters (including hosts, guests, programmers, and more) to its far-flung locations (including the town of Sweetwater, the surrounding badlands, and the high-tech lairs underneath the park), and its plethora of sex, violence, and death.

It's somewhat surprising, then, that the pilot doesn't end in a burst of blood or a shocking plot twist or some other agonizing cliffhanger; rather, it ends on a subdued note, with host Dolores Abernathy (Evan Rachel Wood) standing on her front porch, swatting at a fly. Not exactly Jaime Lannister pushing Bran Stark out of a tower, is it? And yet this subversively quiet ending is actually an ominous harbinger of things to come.

The full significance of the episode's final image is brought into focus by a question that Dolores answered a few minutes earlier while she was being interrogated by Head of Security Ashley Stubbs (Luke Hemsworth). After inquiring what her father whispered in her ear while glitching out, Stubbs asked Dolores: "Have you ever hurt a living thing?" Her response: "No. Of course not." And yet, a few moments later, we watch as Dolores kills the insect crawling across her neck. The park's architects may think their mechanical creations literally can't hurt a fly — but something in Dolores has apparently bypassed this most fundamental of rules.

That's certainly not good news for anyone, since the robot hosts' inability to kill their human guests is supposed to be the single inviable rule of Westworld and the foundation upon which the entire park is built. The guests can kill the hosts, they can watch as hosts kill other hosts… but no one is supposed to kill the guests. If Dolores is now capable of killing a fly, how long will it be until she's capable of killing a human?

This question is especially concerning considering what else we learn about Dolores during her interrogation with Stubbs: she has been updated so many times she looks brand new, but in fact she is the park's oldest host. Think of all the violence and death she has witnessed over the years. The so-called "reveries" that Dr. Ford (Anthony Hopkins) recently programmed into the hosts are supposed to make them more lifelike, but instead they seem to be giving the robots access to memories that should have been wiped.

If Dolores suddenly remembers all of the horrors she's lived through over and over again throughout her bloody history — and there's no longer anything to stop her from killing — then it's hard to imagine that her revenge will be anything less than swift and terrible. The ending to this Sunday's episode may have been subtle, but it quite possibly spells doom for Westworld and the humans who work and play there.