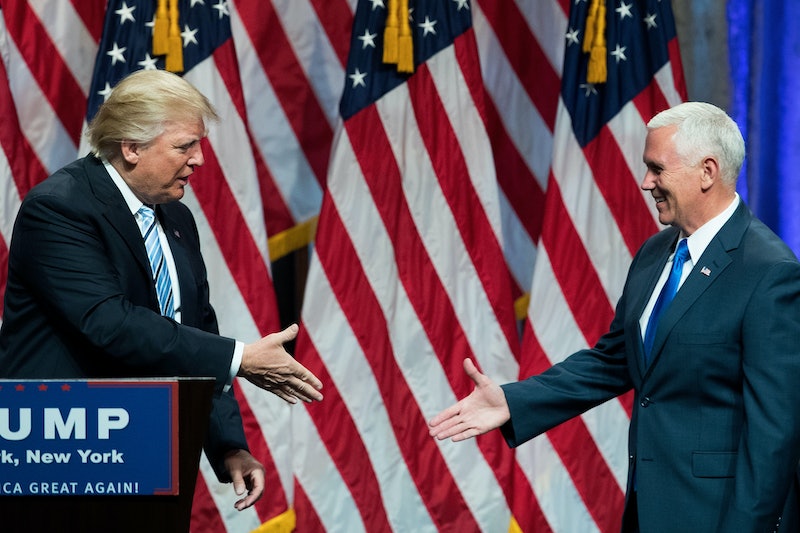 Just in case you were worried you might have to sit through a single debate during this Scooby Doo Carnival of an election cycle that wasn't entirely about the micro-blog ramblings of reality-star-turned-Republican-candidate Donald Trump, don't fret! Trump promised that he'd live tweet the debate during the first and only matchup between his running mate, Indiana Gov. Mike Pence, and Hillary Clinton's running mate Virginia Sen. Tim Kaine.

There are plenty of people who thought Trump might've opted to (even temporarily) hand his Twitter account over to the more refined touch of an Olivia Pope-type media miracle worker after his unfortunate post-debate 3 a.m. Twitter bender where he attacked former Miss Universe Alicia Machado for her weight and alleged promiscuity. However, it appears that he's fundamentally against sharing the spotlight with his would-be VP, and fundamentally against keeping some of his oh-so-special thoughts to himself for even the shortest period of time. He chose to be there in spirit — like, the spooky, horror movie kind— so, even if you weren't planning on watching the debate, you can live vicariously through the poorly-punctuated, reactionary missives, and it'll be just like you were there live!

Naturally, Trump did a fair share of retweeting his fans — whether it's graphics or praise for his team or criticism of Kaine, he's quick with the RT.

And, early on, as his followers determined that Pence was holding his own over Kaine, Trump proclaimed his approval.

He kept up that positive tone, never really slipping too far beyond pre-written campaign informational posts that he'd either tweet out himself or RT from various Trump-supporter accounts. The only times he strayed from the straight and narrow seemed to be when he channeled his inner AIM Chat Room nightmare and slipped into all-caps. First, when disseminating some of the campaign materials...

And, again, when writing that "they" — the amorphous, omniscient presence he often discusses when fabricating praise — thought of Pence's performance.

However, regardless of the spin or the case-choices, Trump got his final word shortly after the debate ended: "Mike Pence won big. We should all be proud of Mike!"

I guess you could say he thought Pence's performance was yuge.