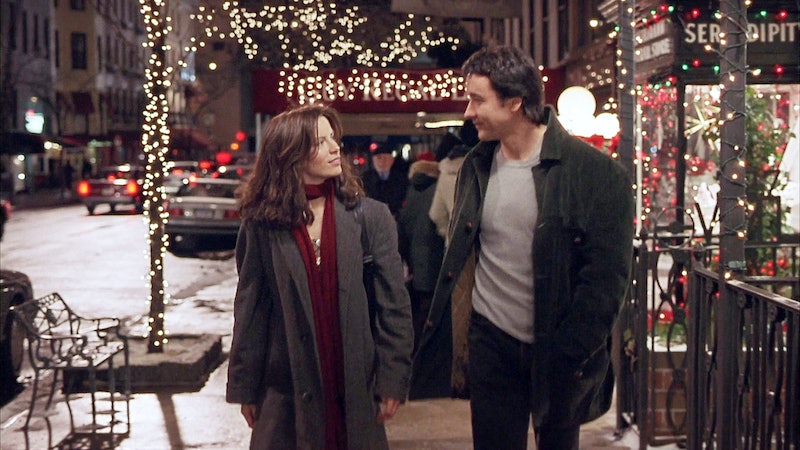 15 years ago this Wednesday, audiences and hopeless romantics had a date with destiny with the release of the timeless romantic comedy Serendipity . Whether a believer in fate or not, no one can deny the captivating and hypnotic wonder of life as somewhat predetermined is nothing short of a mystical experience. Even after 15 years, watching the film and wondering if events are intricate, "fortunate accidents" makes things seem not only exciting, but somewhat comforting. In addition to the romantic premise of the film, Kate Beckinsale and John Cusack had an iconic on-camera chemistry that effortlessly departs from the screen, causing viewers to relentlessly root for them, even still. I felt this way when I first saw the film (it was released when I was only 10, yes, I'm a romantic), and I feel the same way now.

But re-watching as a 25-year-old made me realize elements I never noticed before—whether purely topical or deep in meaning. After speaking with Beckinsale just a few months ago and having her reflect on the movie (which she called "very sweet and innocent"), it was only right that I join her and go back to watch it to celebrate the big anniversary. Watching closely as an adult and noticing new, little details was super nostalgic and entertaining, and only made me appreciate the film (and want to let go of cynicism) that much more.

1. Jonathan (Cusack) tells Sara (Beckinsale) he has a girlfriend over frozen hot chocolate at Serendipity.

I always knew Sara was in a relationship when they first met, but never knew he was, too. Why, all this time, did I think he was single? He says the black gloves (AKA the kickstart to their destiny together) were intended to be for his girlfriend. Sneaky.

2. After establishing he does, in fact, have a girlfriend, he hits on Sara—totally inappropriately.

He calls her “a beautiful, attractive English girl with a boyfriend” and later blatantly says he’s has a “crush on someone else’s girlfriend.” No cares given, but honestly, I like his style.

3. Sara says the meaning of “serendipity” is “a fortunate accident.” But if I’m getting technical, the real meaning is a bit different.

According to Merriam Webster, the real definition is: the faculty or phenomenon of finding valuable or agreeable things not sought for.

4. It conveniently starts snowing during the ice skating scene.

Here I was, thinking it was the mythical gods adding this alluring and romantic element, when really, it was movie magic and probably mashed potato flakes.

5. When Sara falls and cuts her arm, Jonathan says he’ll fix her right up. But where is the bandaid from?

Not only does he seem to get the bandaid out of nowhere, but he also winds up with a pen to draw the constellation story on Sara’s arm.

6. The story of queen Cassiopeia, which he draws on Sara’s arm, is real Greek mythology.

Jonathan says Sara’s freckles resemble Cassiopeia’s constellation and then accurately tells her story. The queen was beautiful and arrogant, but horribly vain and the sea god “plac[ed] her in the heavens upside-down in her throne stuck for eternity with her skirt around her shoulders and all the blood rushing to her head.”

As Jonathan tells the story, he says, “She made one tragic mistake and paid for eternity.” Luckily, Sara doesn’t have to pay for eternity for giving Jonathan up after their magical night together, but she was pretty darn close to it.

8. When Sara buys Certs to get change, she doesn’t even have the chance to open the package before putting one in her mouth.

It all happened terribly fast. She’s a die-hard believer in fate, but not a magician, guys.

9. Sara writes her information in the book Love in the Time of Cholera, which could’ve also foreshadowed Jonathan’s fate.

So.many.clues. In the book, a man falls for a woman who ends up marrying a wealthy doctor, and after 50 years, he attends her late husband’s funeral to proclaim his love.

10. Will anyone ever know why the kid in the elevator was dressed as a devil?

It’s Christmas, not Halloween. Am I missing something?

11. Everyone looks incredibly polished to be in NYC in the dead of winter.

At 10, I probably thought this was totally normal, glamorous NYC. At 25, I know people would be trekking through slushy brown snow in oversized Northface jackets and hideous snow boots.

12. Apparently Jonathan wanted to be a documentary filmmaker and his family and fiancé thought that was a joke.

When Dean (Jeremy Piven) is giving a speech at Jonathan’s rehearsal dinner, he says once Halley (Bridget Moynahan) came along, “his adolescent dream of becoming a documentary filmmaker was a thing of the past,” at which point his father says, “Thank god.” Easy does it.

13. There are back-to-back references to make-up sex.

When Halley and Jonathan talk about Dean’s happy relationship with his wife, Jonathan says, “Must be a bitch in their sex life.” After the dinner, Halley tells Jonathan she’s going to “get naked, climb into bed, act like [they] just had a terrible fight.” Is that the only kind of sex they had?

14. When Sara is counseling, she tells the young kid it’s dangerous to put so much hope into the magic of fate, soulmates, and destiny.

15. Both Jonathan and Sara’s significant others play Carrie and Big’s SOs (and eventually exes) on Sex and the City.

16. At the golf club, a man pages “Sara” on the loudspeaker just before Jonathan hears a woman with an English accent.

He doesn’t hear it, though.

17. Turns out, Jonathan’s life as a documentary maker wasn’t OK, but it’s fine that he's an ESPN producer.

Which is what he ends up doing.

Which is ironic, since initially, he was trying to kill Jonathan’s quest to find Sara just before his wedding.

19. Sara wanted a round-cut diamond, and her friend points out that her engagement ring isn’t.

20. Sara embarks on her journey to New York, but what if Jonathan didn't live there anymore?

At least he did his extensive research to find her whereabouts beforehand. Just saying.

Excuse me, sir, women can get cold foot, too.

22. When Halley tells Jonathan to “let go” of whatever is making him distracted, he says something completely low-key, yet telling.

He responds: “I think it already let go of me.” And Halley didn’t even question that. WHAT?

23. There are so many damn clocks and references to time throughout the whole movie.

And somehow, it isn’t cheesy.

When he tells Jonathan that he’s inspired by his foolish ways, he quotes Epictetus, saying, “If you want to improve, be content to be thought foolish and stupid.” There are ancient Greek references all up in this film.

25. When Jonathan and Dean get to Sara’s house in San Francisco, only to see her friend (who they think is her) with another man, they both start crying.

Is that not incredible?

26. The movie never makes it terribly clear whether Jonathan or Halley called off the wedding after his trip to San Francisco.

When Sara learns the news, she starts crying, and says, “He called it off,” but it could’ve very well been Halley.

27. Sara realizes she mixed her wallet up with Eve (Molly Shannon) once she’s seated on the plane.

But wouldn’t she need her license, passport, and/or possibly money to even get on the plane? Again, *movie magic*.

28. Jonathan was getting married at the Waldorf Astoria.

The same hotel where the iconic elevator scene took place.

29. The Greeks make a comeback when Dean refers to the obituary he wrote for Jonathan.

“The Greeks didn’t like obituaries, they only asked one question after a man died: Did he have passion?,” he says.

30. It happens to start snowing again when Jonathan goes to the ice rink at the end of the film.

Fool me once, shame on you…

31. How did the glove land on Jonathan so perfectly while he’s lying on the rink?

Sara threw it from at least 10 feet away, not to mention it’s snowy and windy. Curious…

32. Jonathan cries again at the end when he’s reuniting with Sara.

I love that he's this emotional.

33. There was mysteriously no one else is on the rink when Jonathan and Sara have their reuniting kiss.

34. Sara and Jonathan end up getting engaged and/or married.

When the two return to Bloomingdales to celebrate their anniversary in the closing scene, she’s sporting a very beautiful ring on her finer.

35. The ring isn’t a round-cut diamond, by the way. Just a simple band.

Did I miss anything? If so, I'm sure fate will show me eventually.