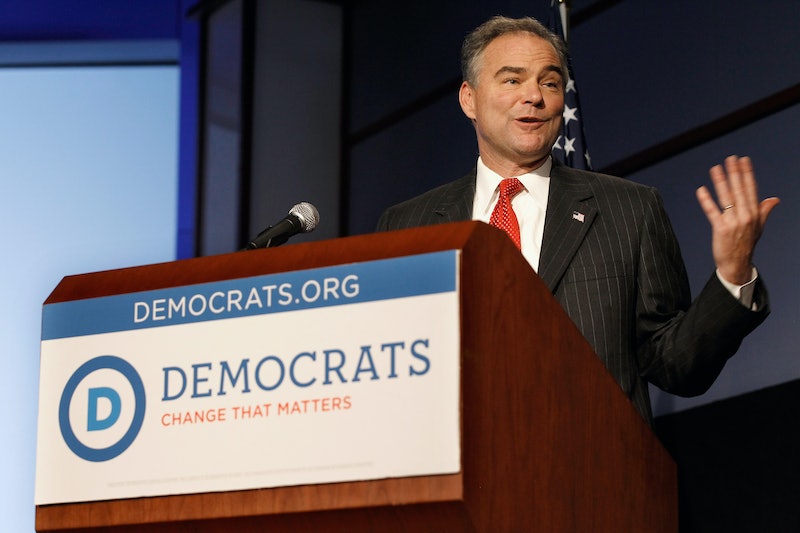 Tim Kaine has a decorated past in politics — he's served all the way from mayor of Virginia's capital city to the state's governor. Now, he's in line to become the next vice president of the United States under Hillary Clinton. He has a unique selling point, too — Kaine likes to frequently tout the fact that in his two decades in politics, he's managed to never lose an election. But while personally accurate, that winning streak didn't necessarily hold true when Kaine was the chairman of the DNC.

Kaine served as the chair of the DNC from 2009 to 2011 at the behest of then newly elected President Obama, having already turned down the decidedly partisan position once before. But despite President Obama's landslide victory the year before, Kaine's tenure as the DNC chair was less than picturesque for fellow Democrats.

In 2010, with Republicans winning up and down the ballot, Democrats lost six gubernatorial elections, six Senate seats, 63 House seats, and likewise lost control of the chamber. Twenty state legislative chambers also flipped with Kaine at the helm of the DNC, including some Southern chambers that had been firmly Democratic for generations. It was an incredibly dismal election cycle for Democrats, many of whom believed victory was a shoo-in.

It seems the natural blame for such a loss would fall to DNC chairman Kaine. But according to a report from POLITICO, many officials both inside and outside the DNC said Kaine's loss doesn't reflect too negatively on his leadership skills. Why was that? It could have gone much, much worse, they said.

"He was handed what was destined to be a turd sandwich," former Pennsylvania Democratic Party Chairman T.J. Rooney told POLITICO. "If you're going to assess blame, it's not fair to pin it on him."

Instead, much of Kaine's legacy came in 2012, when President Obama won reelection and Democrats were able to regain some of their many losses from two years prior. That, Democratic officials told Politico, will be a mark of how Kaine may serve as vice president: steady under pressure, with an ability to maintain relationships despite such a brutal loss.

Voters will hopefully get a chance to see some of that leadership style during Tuesday night's debate between Kaine and Republican VP candidate Mike Pence. The former DNC chair may again be able to show that despite an unsparing election cycle — this time, coming in the form of the Trump' campaign's varied and strange attacks — that he can rise above.