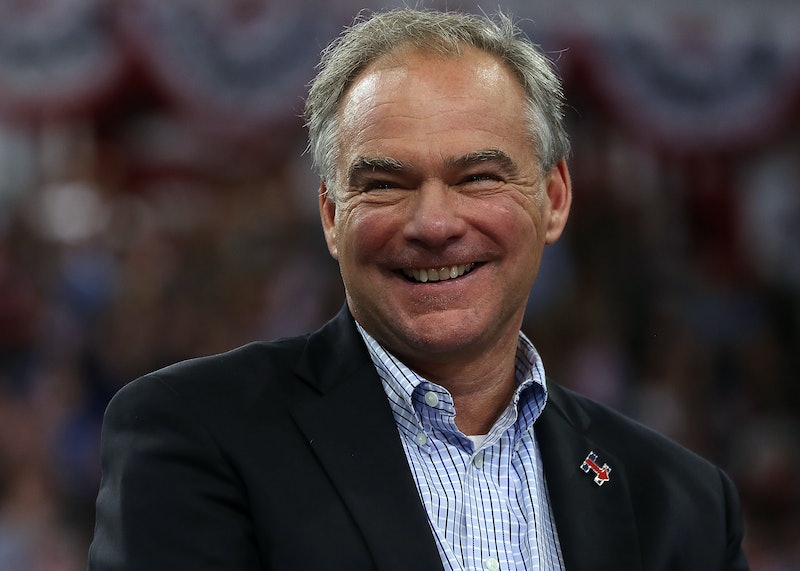 The first and last vice presidential debate aired on Tuesday, Oct. 4. For the first time in this election, it seemed like things made a little more sense — besides the fact that Mike Pence is running for GOP nominee Donald Trump's vice president, of course. There were plenty of important things to discuss on Tuesday night: 916 million, to be exact, if we want to get specific about those tax returns. But if there's one thing we're always ready for on debate night, it's the Twitterverse. So, here are the Tim Kaine memes you didn't know you needed.

After Tuesday night's debate, there are just 34 days left until Election Day 2016, which means the jokes are almost over because this has been one scary election season that's only going to get more suspenseful as the votes pile in. The Vice Presidential debate was definitely less overwhelming than the first Presidential debate — one might even call it underwhelming. That's partly because Trump wasn't there to interrupt anyone 51 times. POLITICO even put it quite perfectly, describing the candidates as "two suburban dads who are about to stop playing nice."

Well, here are some Tim Kaine suburban dad memes and tweets to get you through the next 34 days.

In their first and final match-up, though, these two sweet suburban dads did not play nice, that's for sure.