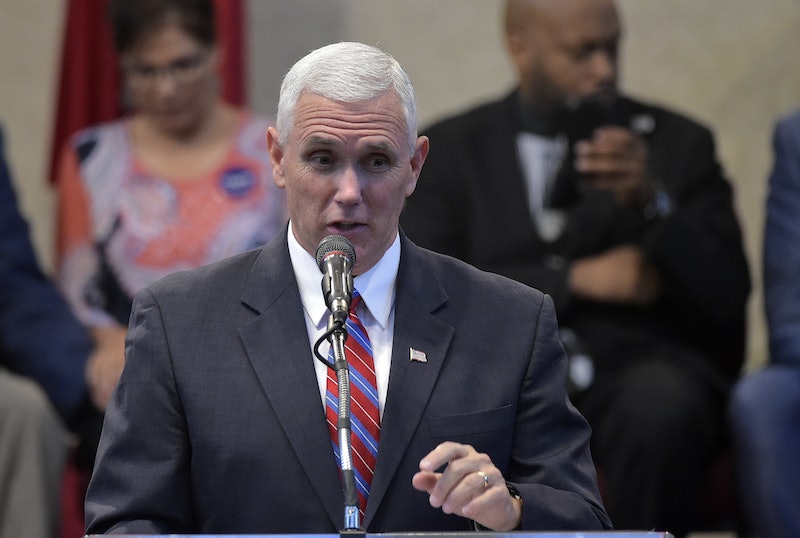 In many ways, Republican vice presidential nominee Mike Pence is the antithesis to the party's provocative candidate, Donald Trump. The Indiana governor has repeatedly billed himself "a Christian, a conservative, and a Republican, in that order," and in 2016, remains a proud, staunch opponent of LGBT rights — an issue that his Democratic counterpart will no doubt use against him in the VP debate

In fact, Pence's hard-line stance against LGBT rights was so deep that after the Supreme Court overturned the Defense of Marriage Act back in 2013, Pence deleted the pro-gay marriage comments on his Facebook post reaffirming his state's commitment to "traditional marriage." His statement on Facebook in response to the SCOTUS decision read:

While I am disappointed that the Supreme Court has overturned the federal Defense of Marriage Act, I am grateful that today's decisions respect the sovereignty of states on this important issue. These decisions preserve the duty and obligation of the states to define and administer marriage as they see fit.

Now that the Supreme Court has had its say on the federal government's role in defining marriage, the people of Indiana should have their say about how marriage is understood and defined in our state.

Given that opportunity, I am confident that Hoosiers will reaffirm our commitment to traditional marriage and will consider this important question with civility and respect for the values and dignity of all of the people of our state.

If Pence and his office thought they could get away with that, they were sorely mistaken. Facebook users made it known that their comments had mysteriously vanished, and the backlash compelled Pence to issue a defense of the move, claiming that the hundreds of comments deleted were "uncivil."

But Pence later backtracked, and once again took to Facebook to apologize. "It was my understanding," Pence wrote, that the deleted comments were inflammatory, but upon careful review, "this was not always the case." He also added, rather sheepishly:

Some comments were being deleted simply because they expressed disagreement with my position. I regret that this occurred and sincerely apologize to all those who were affected.

Of course, two years after that Facebook debacle, the Supreme Court ruled that gay marriage was a constitutional right. Pence's response? He said that although he was "disappointed" in the ruling, he conceded:

Our citizens are free to disagree with decisions of the Supreme Court, but we are not free to disobey them. As we move forward as a state and a nation, Hoosiers may be assured that our Administration will respect the law and the dignity and worth of every Hoosier and every Hoosier family.

Pence seemed to have learned his lesson since, but he could do well to remember that social media rarely, if ever, forgets.

More like this
If You're Lazy But Want To Look Good, You'll Love These 41 Things Under $35 On Amazon
By Cristina Sanza
If You Have Any Of These Expensive Problems Around Your Home, You'll Love These Genius, Cheap Fixes
By Mackenzie Edwards
Amazon's Selling A Ton Of This Underwear That's Practical & Super Sexy
By Sara Brown-Rigoli
You've Probably Never Heard Of These Strange Products That Make Life SO Much Better
By Maria Sabella
Get Even More From Bustle — Sign Up For The Newsletter