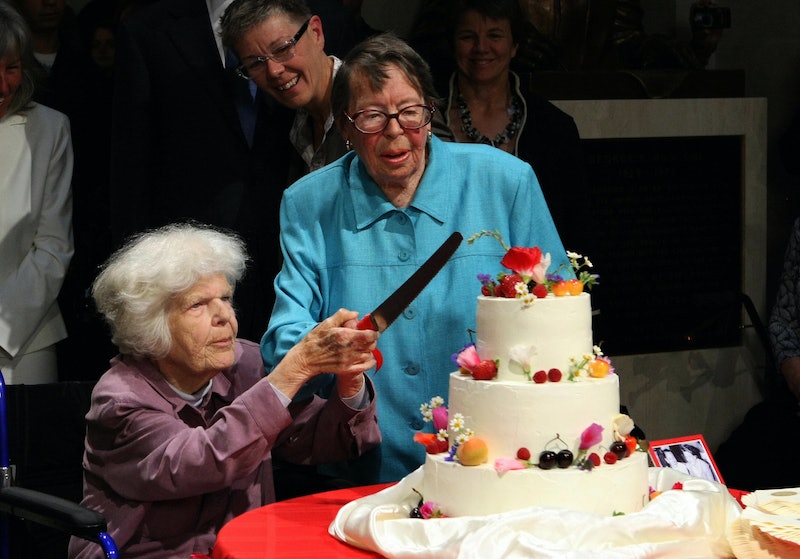 With today's announcement that states can no longer ban same-sex couples from marrying, it's a great time to reflect on marriage equality history. The fight to the top has been quite an uphill battle; marriage equality in the U.S. has been a piecemeal, hardscrabble fight, with legal defeats, tireless activism and a few serious ideological clashes along the way. It's developed alongside the LGBT rights movement — Stonewall and Harvey Milk paved the way — but has its own unique history. And there are some key people who'll hopefully be known in the future as cornerstones on the long path to American same-sex marriage.

Marriage equality didn't come out of nowhere to become a glowing, Facebook-status, celeb-supported cause; the first people to try to acquire a same-sex marriage certificate did so back in 1970, and LGBT civil rights organizations, like the kind supporting the fight for marriage equality today, date back to the middle of the 20th century. The Daughters of Bilitis, the first lesbian civil rights group, was formed in 1955, and the Mattachine Society, a civil rights organization for gay men, came into being in 1950 (and was investigated by the FBI shortly afterwards). The struggle to get to this point has been longer than most people realize, and it is crucial that we recognize that, even as we celebrate.

In honor of this historic, ruling, here are 13 amazing people who contributed to the journey towards same-sex marriage in America.

When Texas police came looking for bartender and artist Michael Hardwick with an arrest warrant in 1982, they observed him and his boyfriend having oral sex — and promptly arrested him for sodomy. The ensuing case went all the way to the Georgia Supreme Court, which claimed that Hardwick didn't have a right to privacy. The decision was overturned in 2003 by the U.S. Supreme Court, when the court declared the sodomy law declared unconstitutional, with Justice Anthony Kennedy (a noted gay rights defender) writing: “The state cannot demean their [gays'] existence or control their destiny by making their private sexual conduct a crime."

Kristen Perry is the "Perry" in Hollingsworth vs Perry, the legal case against Governor Hollingsworth of California for the right to marriage equality. Perry and her partner Stier, plus fellow same-sex partners Katami and Zarrillo, were the ones who sued the state of California and several state officials in 2009, after being denied marriage licenses on the basis of their genders. We all know what happened next: Prop 8, and then 2013's stunning Supreme Court decision that turfed it out. On the day of the decision, Perry and Stier, who have four boys together, were flooded by the media, and took a call from President Obama congratulating them on their achievement.

When TIME calls you "the matriarch of the gay rights movement," you know you've done something important. After Edith Winsdor's lifelong partner Thea Spyer died in 2009, she sued the government for a return on the estate taxes she'd had to pay — taxes she wouldn't have had to pay if their Canadian marriage had been recognized in the U.S. The Supreme Court's decision in her favor in 2013 threw out the Defense of Marriage Act, and Anthony Kennedy wrote: "The federal statute is invalid, for no legitimate purpose overcomes the purpose and effect to disparage and to injure those whom the State, by its marriage laws, sought to protect in personhood and dignity.

In 1987, Frank, a Democratic member of the U.S. Congress, voluntarily came out, and in 2012 he married his same-sex partner, James Ready. He was the first gay U.S. Congress member to voluntarily come out of the closet, as well as the first gay Congress member to legally marry while in office. Gay visibility is important at all levels of government, and Frank recognized that. "I am very proud of the role I played in getting legal equality for people who are lesbian, gay, bisexual and transgender, and in helping get rid of the prejudice by being visible about it," he's said.

Langbehn wasn't allowed to be with her partner of 18 years, Lisa Marie Pond, when Pond died unexpectedly in 2007 — because laws didn't recognize her right to be present as a spouse. She sued the hospital, but the judge dismissed the case, while admitting that the hospital had caused "needless distress." Since then, Langbehn has been an activist for the rights of same-sex couples to be the same as opposite-sex ones, and has received the Presidential Citizens Medal in 2011.

Del and Phyllis were nothing if not persistent. They were the founders of the Daughters of Bilitis, and married not once, but twice. The first time, they were hitched in 2004 after San Francisco Mayor Gavin Newsom ordered same-sex marriage licenses be issued — but their marriage was swiftly voided by the Supreme Court. The second time they married was in 2008, when same-sex marriage became legal in San Francisco again. In both instances, they were the first people to be granted marriage licenses in the city — as befits people who were, at the time of their second marriage, 87 and 84 respectively. Age before beauty, and these two badasses before everybody.

Yes, she's a celebrity — but Ellen wasn't just another celebrity to jump on the marriage equality bandwagon. She was the bandwagon. After becoming the first lesbian to come out on national primetime television on her sitcom Ellen in 1997, DeGeneres also became one of the first out married celebrities in America in 2008. The (frankly seriously beautiful) wedding in which she married Portia De Rossi was front-page news. People Magazine, the bastion of conservative Hollywood gossip, printed their "wedding album." After Ellen, same-sex marriage was mainstream.

Partners and gay rights activists Jack Baker and Michael McConnell applied for a marriage license in 1970 in Minnesota. It was, obviously, denied, but Baker and McConnell sued, and their right to marry was argued — and ultimately denied — all the way up to the US Supreme Court, which refused them the right to marry in 1972. However, in 1971, the two were issued a license and legally married by a minister in Blue Earth County, also in Minnesota — and the license was never revoked. So it's likely these two were the first to ever have a same-sex marriage in the United States.