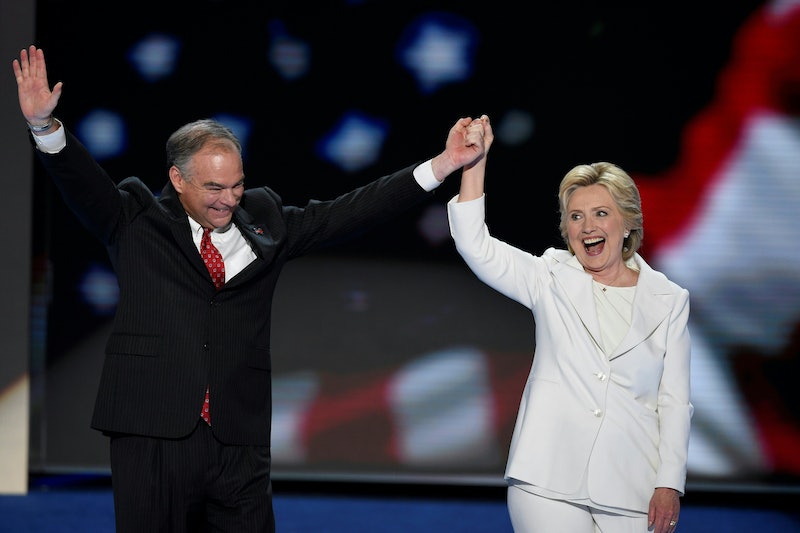 Ahead of Tuesday night's vice presidential campaign, Hillary Clinton's campaign tried to remind voters of what they love most about Tim Kaine: his fatherly affability and that he was hot in the '80s. When Clinton announced Kaine as her running mate in July, he came out and spoke Spanish to the crowd. It was like watching your dad saying "gracias" to the waiter at a Mexican restaurant. After his DNC speech the following week, the dad jokes were born.

Kaine has not been able to shake the characterization, and the campaign has even seemed to capitalize on it. This week, the campaign's director of progressive media tweeted out a GIF on Tuesday of his infamous "hot photo" with the hashtag #SuperDad.

In case you somehow missed that revelation back in July, that beauty in black-and-white is none other than Kaine. The photo came out shortly after he was announced as Clinton's running mate, and Twitter collectively swooned. Unfortunately, that wasn't the Kaine you watched for 90 minutes on Tuesday night at the vice presidential debate. But even though the boyish good looks may have faded, the dad jokes and intermittent Spanglish will be in full force. And seeing how Twitter reacted, it seems the Clinton campaign's strategy to remind people of Kaine's looks in the '80s was a smart move.

Some people were fantasizing about growing up with a Tim Kaine figure in their life:

While others were just focusing on how dreamy he was in his youth:

Until Mike Pence releases his old photos, Kaine is definitely the front runner for #SuperDad of this debate.