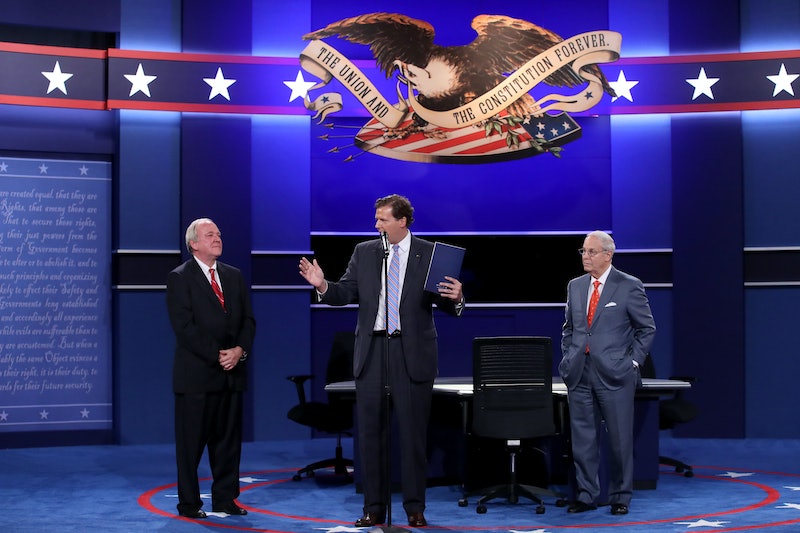 When the vice presidential forum kicked off Tuesday, a lot of viewers immediately wondered: What pin was Tim Kaine wearing at the debate? It wasn't an American flag pin, and despite what some people on Twitter thought, it wasn't a Hillary Clinton campaign logo pin either. So what was it?

In fact, Kaine was wearing a Blue Star Flag, also known as a Blue Star Service Flag or a Blue Star Banner. This symbol is often used by people who have a family member currently serving in the U.S. armed forces. and Kaine falls into that category, as his son Nat is in the Marines — incidentally, the same is true of Pence, though he was wearing an American flag pin on Tuesday night.

It's probably not a huge surprise that people were confused. The Blue Star Flag isn't widely known to the general public, so a lot of viewers truly had no idea what it was. It's also not surprising that a lot of people criticized Kaine — inaccurately — for sporting a Clinton campaign logo, a Mexican flag or, in several cases, the flag of Japan on his lapel pin.

Thankfully some Twitter folk know what they were looking at:

But others were still confused:

Sporting an American flag pin on the lapel is standard practice for politicians (well, American politicians), and it's equally common for them to face criticism if they lack such a pin at an important event. Clinton was slammed by conservatives on Twitter for not having an American flag pin when she accepted the Democratic presidential nomination in July. However, George W. Bush, George H.W. Bush and John McCain all didn't wear American flags on their suit jackets while accepting their presidential nominations, so Clinton was not breaking with precedent here.

Moreover, what sort of pins the candidates wear on their lapels is perhaps the least important component of a political debate. Far more pertinent is what the candidates say. Kaine's pin, while confusing to many, is ultimately irrelevant — especially in an election as high stakes as this one.

To have a say in this election, you can register below.

More like this
15 Halloween Costumes Inspired By TikTok Trends
By Emma Carey
The Fast Follow With @LexDelValle
By Alexis Morillo
Why TikTok Is Obsessed With Caesar Salads Right Now
By Alexis Morillo
Behind The Hilarity Of The "POV: You Walk Into My Room" TikTok Trend
By Lexi Inks
Get Even More From Bustle — Sign Up For The Newsletter