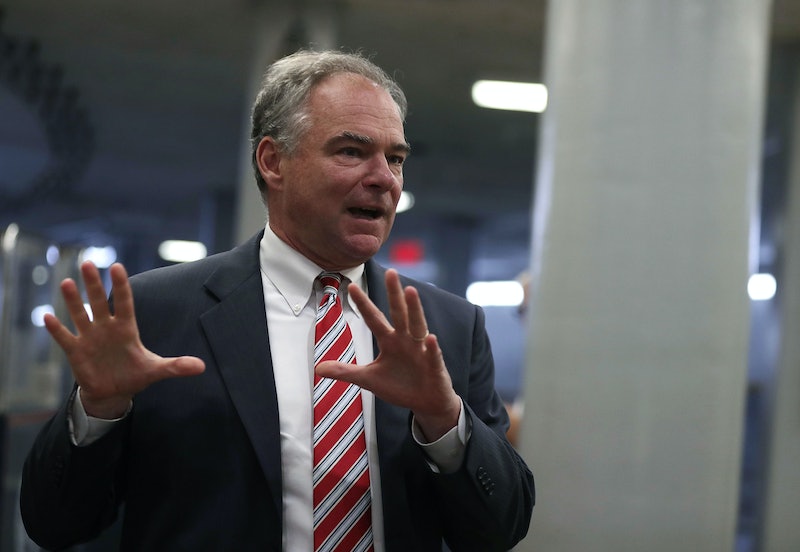 After Hillary Clinton finally announced Tim Kaine as her official vice presidential pick, many are wondering more about Kaine's family. Who is Nat Kaine? Kaine's son is the oldest of his three children.

Clinton revealed Kaine as her VP pick in the late evening on July 22, just before the start of the Democratic National Convention. Many had speculated that Kaine would be the choice, and the Clinton-Kaine logo proves even further that they'll be a great team. Now that Kaine is officially in the vice presidential spotlight, people are looking to him and his family to learn more about Clinton's running mate.

Kaine has three children, two boys, Nat and Woody, and only one daughter, Annella. Annella is currently majoring in theater at New York University, and not much is known about Woody. All three of Kaine's kids attended public schools in Richmond, Virginia, and Nat went on to graduate from George Washington University ROTC.

Nat is an active-duty marine, which makes Kaine one of the few Congressman with a child who is actively serving in the military. This has understandably made Kaine more sensitive to some of the military criticisms expressed by others, particularly Donald Trump. "When I hear Donald Trump say the American military is a disaster, I want to go through the screen and shake the guy," Kaine said in an interview on MSNBC's Morning Joe . "We ought to have a commander in chief who talks about our troops with respect and gratitude."

Kaine has brought up his son Nat during speeches in the past, too. In 2014, while Kaine talked with veterans in Virginia, Kaine revealed how much he cares about military issues and foreign policy. "My son is an infantry officer who takes control of his first platoon Monday so these are issues that matter to me personally," Kaine said.

Similarly, when Kaine was running for a U.S. Senate seat against George Allen, he used his son as example to express to voters how seriously he would take national security and foreign policy issues, as well as veterans affairs. “You and I are both fathers,” Kaine said. “I have a son who has started a career in the military. I will not do things that will hurt the troops or defense. I will not do things hurting veterans.”

Nat was scheduled to start actively serving in the marines in January 2013, and he is currently 24 years old.