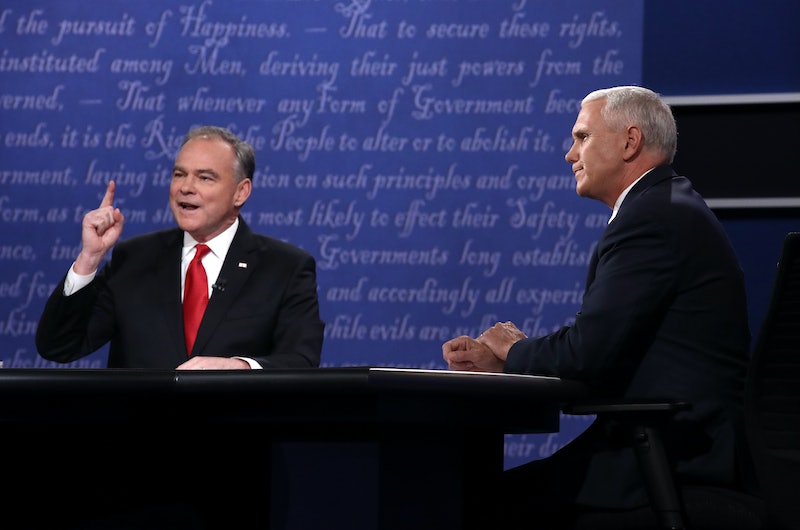 The 2016 vice presidential debate got off to quite an interesting start, including some messy interruptions during an "open discussion" format. Tim Kaine told Mike Pence he is "Donald Trump's apprentice" just 14 minutes in, and Pence mistakenly called Longwood University "Norwood University."(Fun fact: Longwood University in Farmville, Virginia, is this year's host of the VP debate aka where Pence is at the moment). But perhaps the most heated debate on Tuesday night that involved the two VP candidates was over their eyebrows.

While most of the conversation on Twitter centered around Kaine's on fleek, bushy brows, Twitter users were also quick to note the contrast. Pence's eyebrows are, well, kind of MIA. As Twitter user @MrsDavidhizar put it: "Can we all be honest and admit that this #VPDebate is really about eyebrows vs no eyebrows?"

But more importantly, people began to derive meaning from this battle of the brows. How did Kaine get such a great arc? What does this say about them as people? Their politics? Democrats versus Republicans? Their ability to lead our country? More importantly, can you really trust a man with no eyebrows to lead this country? That, that is what it's all about.

Here's how Kaine's eyebrows totally killed it during the debates — and some speculation about Pence's missing eyebrows.

It's All Gonna Be OK

And the response to Pence's?

Whoever's eyebrows you're more interested in, don't forget to vote this year. You can register to do so below.

It may have been a showdown between Kaine and Pence's policies — well, more realistically, the presidential candidates they're under — but it was their eyebrows that really stole the show.