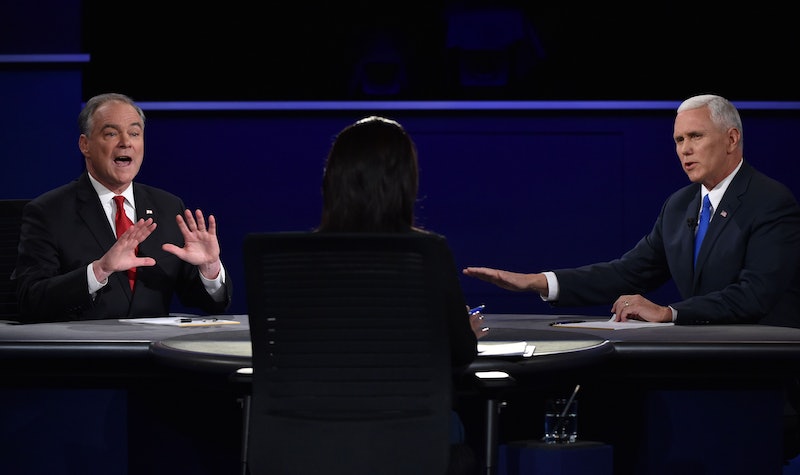 After the vice presidential debate ended, one GIF stole the show. Specifically, a GIF that showed Sen. Tim Kaine listing off a laundry list of outrageous insults and volatile statements uttered by GOP presidential candidate Donald Trump during the course of his campaign, as Gov. Mike Pence shook his head in a futile attempt to refute said claims. And this GIF captured much of the vibe of this vice presidential debate.

During the vice presidential debate, which was held at Longwood University in Farmville, Virginia, the Pence head-shake made several appearances throughout the night. One particularly heated moment came when Sen. Kaine called out Trump for "defending Vladimir Putin," to which Pence shook his head with the slightest suggestion of a smile. It had been widely predicted that Pence would have to defend many of the outrageous statements and claims made by Trump. And that prediction has been largely on the money.

Kaine had previously called out Trump for comments that seemed praiseworthy of Putin's "great control of his country," saying that his "heart sunk" when he heard Trump's comments on NBC’s Commander-In-Chief forum in September. When Kaine brought that talking point up again and said that Trump had been praiseworthy of Putin, Pence repeatedly shook his head.

And this GIF sums up much of the dynamic between the Kaine and Pence:

After Sen. Kaine called Putin a "dictator" and not a "leader," Pence responded by saying: "I'm just trying to keep up with the insult-driven campaign." Kaine interjected with, "I'm just stating the facts of your running mate."

The two also battled over Trump's comments regarding immigration, the way he has described the appearance of women, the candidates' views regarding abortion, and how each candidate would deal with ISIS and Syria. Another heated moment came when the candidates went toe-to-toe regarding the controversies regarding the Clinton Foundation and the Trump Foundation. Pence also lobbed attacks on Clinton, regarding Clinton's private email server, the way she and the Obama administration dealt with ISIS, and her views on abortion. But Pence had to also spend a great deal of the debate deflecting the sundry statements Trump has made that were less than presidential. When Clinton's "basket of deplorables" comment regrading Trump's supporters came up, Kaine shot back by saying that Clinton was able to retract her statement and apologize. “You will look in vain for Donald Trump ever apologizing,” Pence said.

It was a fairly lackluster debate, but Pence's head-shaking GIF perfectly summed up the clear frustration that existed between him and Kaine throughout the night.