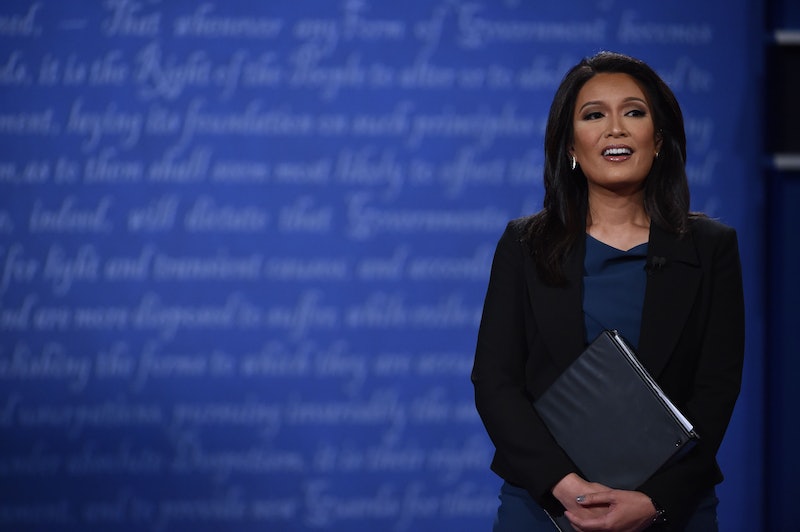 Given that the two vice-presidential candidates are both men, it appears that some Twitter users may have been searching for the nearest woman to berate. Unfortunately, they found a target in this debate's moderator — the sexist comments against Elaine Quijano during the VP debate are so unfair, it's not even funny.

While many on Twitter were lamenting the sexist treatment Quijano received from the candidates themselves, others used the platform to spew their own less-than-savory opinions about the Filipina-American CBS reporter. Quijano is not only the youngest person to moderate a debate of this scale in 28 years, but also the first Asian-American to moderate a national debate. Those accolades are seemingly meaningless in the eyes of the garden variety misogynists of Twitter, who apparently are much more intent on sexualizing and demeaning a female moderator than actually listening to what she has to say, or judging her performance based on any criteria other than her gender.

Below are some lovely gems from around Twitter that make it seem a lot more like 1956 than 2016.

Here, the accomplished journalist is called a stripper, and also this person casts aspersions on strippers:

In which Quijano is compared to Megyn Kelly probably just because they are both women:

In which this guy calls the accomplished journalist "hot ass:"

Again with the commentary on her makeup:

Despite growing diversity among the American electorate, the number of female debate moderators since televised debates became a regular election year occurrence since the 1960's has been embarrassingly low — in 2012, only three women had moderated presidential debates before Candy Crowley hosted a now-infamous debate between President Obama and Mitt Romney in 2012, and only two had moderated vice-presidential debates. It's deplorable that being a woman in such an important and history-making role brings out the worst in the minds of misogynists who can't accept that women are real people with careers, but then again, that seems to be a theme this election.