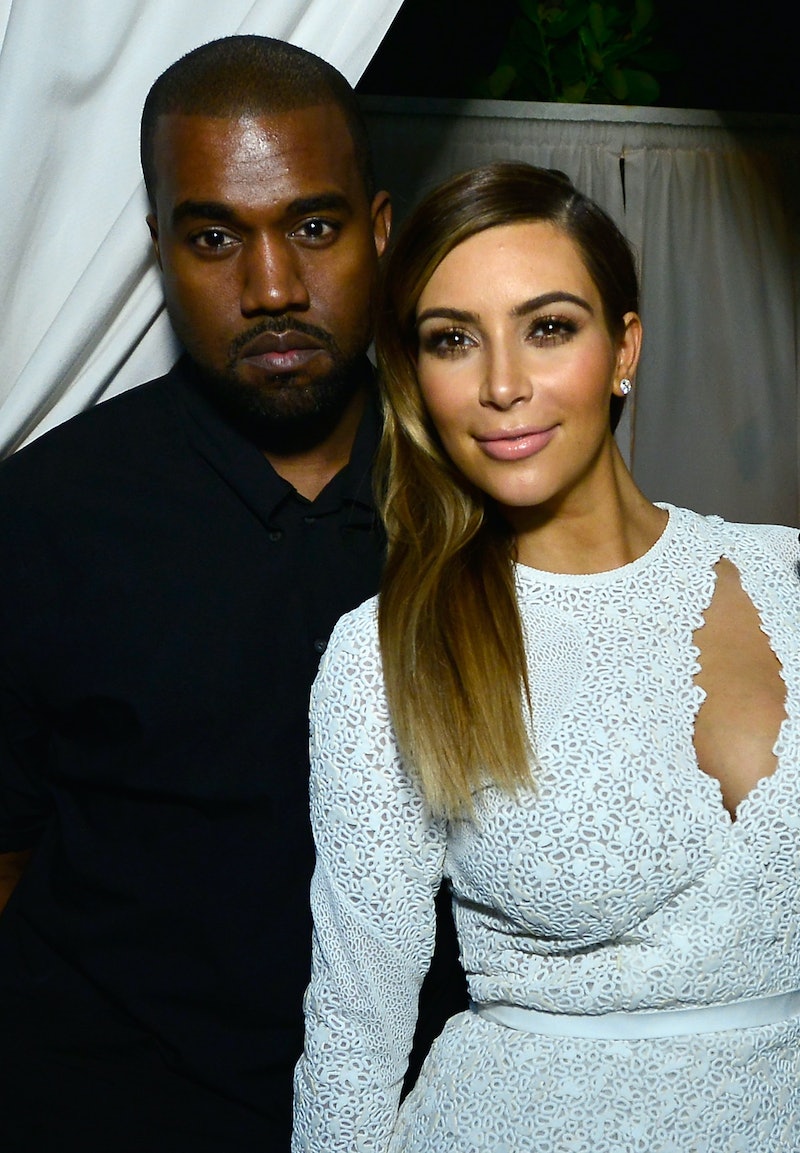 It happened. Don't even act like you don't know what "it' is. "It" has been talked about for months, maybe even years at this point, so we have all universally agreed on what "it" means and now it's happened. Kim Kardashian is on the cover of Vogue . Oh, and Kanye West is there too because he might have been the one that finagled this thing into being. I'm thinking he convinced Ricardo Tisci to threaten Anna Wintour and say the magazine couldn't use Givenchy anymore. Or maybe he paid an intern to trade out of the photos of the real cover girl for photos of him and Kardashian. Who knows what actually happened! All we know is Kim Kardashian (and Kanye West) are on the cover of Vogue's April issue! Go write a song about it Kanye, you deserve it. And, Kim, stare at that thing as long as you want. Get giant pictures of it blown up and use them as wallpaper. This is your moment!

On the cover, Kardashian wears a wedding dress and shows off her giganto engagement ring while West wraps his arms around her. He's looking down as if he doesn't care that they are FINALLY ON VOGUE while Kardashian has a sly look on her face. Kardashian isn't a great model or actress — did you see her blank face in the "Bound 2" video? — so the fact that she has such a sneaky expression proves that the cover of Vogue is what she's been waiting for. It's the only thing that can pull this type of emotion out of her. "Screw, Kanye," she says with her smize, "I got with this guy for one reason and one reason only and now my plan is complete!"

The cover reads, "Kim & Kanye: Their Fashionable Life and Surreal Times: #WORLDSMOSTTALKEDABOUTCOUPLE." Really, Vogue? A hashtag? You are the magazine that thinks inexpesive means less than $500. You're really degrading yourself with hashtag usage.

In the issue, Kardashian and West are photographed by Annie Leibovitz (duh) along with baby North. Kardashian models several wedding gowns (duh) and I'm sure she felt just like Carrie Bradshaw in the Sex and the City Movie except even cooler because she's KIM KARDASHIAN ON VOGUE.

As if all of this wasn't enough, Vogue also made a behind the scenes video set to "Bound 2." What is Vogue doing? Next thing you know their gift guide is going to include things that aren't "price upon request." #WEAREN'TSNOBSANYMORE