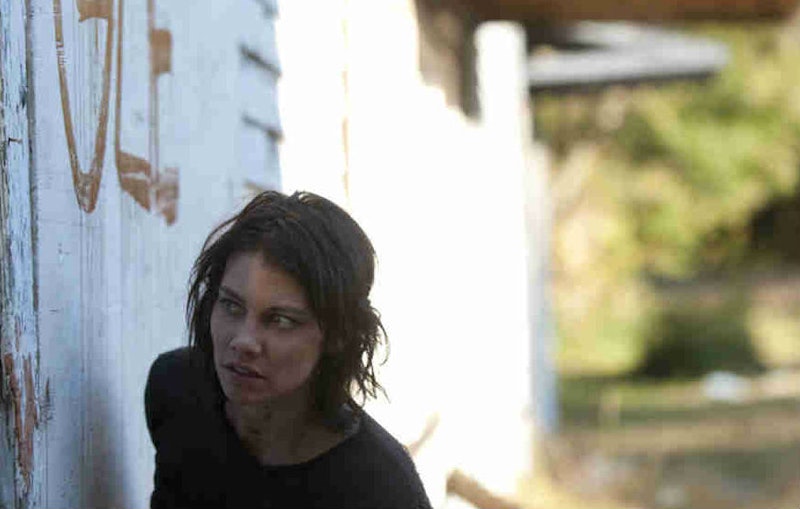 AMC's The Walking Dead has us scratching our heads once more as the group is split up and in search of a sanctuary called Terminus. But unlike their previous "sanctuary" The Prison, we don't have the benefit of fans who read the comics telling us how excited we should be for this next location because Terminus isn't a place ripped from the pages of a graphic novel — at least in name. So just what is Terminus?

Well, without the comics as a guide and no actual characters setting foot in the supposedly hallowed place just yet, we're kind of S.O.L. on clear descriptions. We know that it's supposed to be "Sanctuary for all. Community for all. Those that arrive survive," according to signs that Tyreese, Carol, and Co. find along the railroad tracks. We also know that with all the attention placed on the search, that we'll at least learn something about this new, likely too-good-to-be-true locale... eventually — after all, think about how drawn out the prison reveal was a few seasons ago.

With such little information, we're forced to dig for meaning in the name of the supposed haven and in the terminology used by the inhabitants who created the signs leading to Terminus.

Exhibit A: Terminus Literally Means "End of the Tracks"

This one's a gimme. A terminus is the point at which the railroad tracks end, so it can be assumed that at one end of the tracks, there lies this "sanctuary."

Exhibit B: Terminus Is Also the Original Name for Atlanta

Because it was the end of the Georgia-to-Midwest line. That certainly helps us figure out which end of that railroad line to focus on.

In Roman Mythology, Terminus was a god who protected boundaries — and terminus means "boundary" in Latin, so go figure. This also makes sense, because if this community is a safe place, it's likely that it remains as such thanks to various boundaries meant to keep walkers out, which Terminus inhabitants protect with all of their might.

In Isaac Assimov's Foundation Series , Terminus is a planet at the edge of the galaxy — another "end of the line" reference. But Assimov's Terminus is made into a metropolis after expelling the lower life forms living there -—walkers, anyone? Eventually, the lower life forms are crowed out, kept only in captivity at various universities. If we replace "lesser life forms" with "walkers," we've got ourselves a model for the end of the zombie apocalypse fantasy. Could this new sanctuary be the key to rebuilding society?

So far, all the signs point to a positive outcome at Terminus, but when we look upon Emerson's poem "Terminus" which is about death — the end of life's line — things start to look a little less certain.

Obey the voice at eve obeyed at prime:/“Lowly faithful, banish fear,/Right onward drive unharmed;/The port, well worth the cruise, is near,And every wave is charmed.”

That really isn't instilling much faith in this supposed Oz for which our survivors are searching.

Exhibit F: An Office and Residential Complex in Atlanta

This feels a little less likely to be tied to The Walking Dead, but there is an office and residential complex in Atlanta called Terminus. If there were a zombie apocalypse and a group of people managed to put up boundaries around these towering creations, they could be a pretty grand fort from which to rebuild society.

Is it just us, or does that phrase in the photo remind you of a certain tracks-bound promise from The Walking Dead? (Then again, so does most luxury home advertising.)

He's a super-villain from the Fantastic Four . Eventually Mr. Fantastic defeats Terminus when the villain tries to take over the world. So this comics-based series probably isn't going to have a intergalactic space villain, but could it be that the leader of this Terminus place has a world domination ego thing going on? Sure it is.

Exhibit H: The Comics' Own "The Sanctuary"

While there is no Terminus in The Walking Dead comic books, there is — much later in the series — a place called The Sanctuary. This place is also known as The Survivors' Base and it's housed in an old factory or mill. The inhabitants of this place are eventually revealed to be a sort of cult, with the leader Negan taking many wives, proliferating wildly violent practices, and holding many henchmen under his thumb. And is that line about "Community for all. All who arrive survive" a little cult-like, or I have just been watching too many episodes of The Following? Could the writers be skipping ahead a bit and playing with the concepts and timeline of later Walking Dead books? If so, things are about to get really, really terrifying.

Yes, Terminus could be a play off of this comic book location, however, The Sanctuary is supposed to be in Virginia or Washington D.C., so if that is the case, then all this Atlanta or end of the line stuff is moot. That, or the TV series really is starting to treat its locations like it treats its characters: however it damn well pleases.

Hopefully, we'll find out what all this Terminus hullabaloo is about soon. After all, we've been hearing about the dang place for long enough.