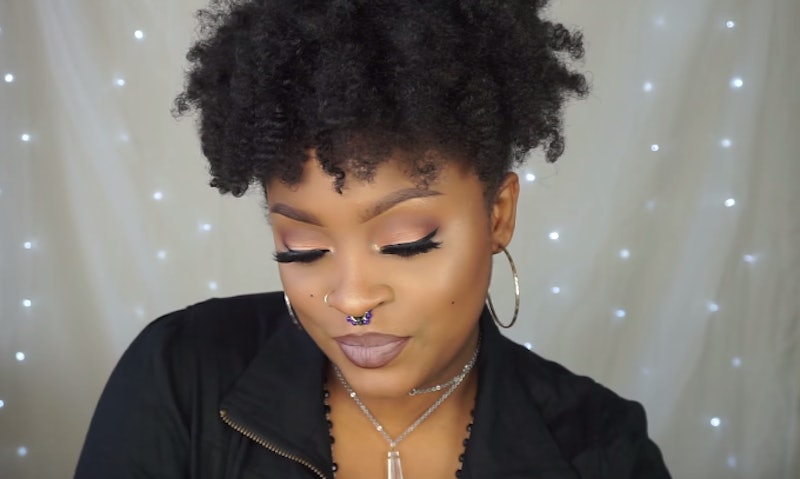 Struggling with your mental health can feel lonely for numerous reasons. From social stigma to not having a visible illness, mental health problems can make a person feel very isolated, very quickly. Thanks to social media vloggers who are open about mental illnesses, the stigma is being confronted in an important and inspirational way. YouTubers who use their platform to represent those with mental illnesses, as well as speaking honestly about their own, help not only themselves but countless people who can relate to their situation.

One of the greatest aspects of fashion and beauty is how universal and diverse this world is. You don't need to be a certain weight, race, gender or class to find comfort and inspiration in makeup tutorials. By talking about their mental health between beauty videos, these YouTubers are only further diversifying the world of fashion and beauty and reiterating the fact that these interests are for absolutely everybody.

Representation is important: It helps to see others dealing with the same things you're dealing with, and to also see them not letting it get in the way of their passions. In between the makeup tutorials and product hauls, these vloggers are changing the face of what a mentally ill person looks like.

In this video, YouTuber Rhian discusses her experiences with cyclothymia — a mild form of bipolar disorder — as well as anxiety. By sharing her stories and not just her diagnosis, Rhian connects to her subscribers on a personal level. Outside of these few and far between mental health videos, Rhian uploads beauty reviews and tutorials twice to three times a week.

With over a million subscribers to her channel, it's incredibly important for Nikki to talk so candidly about her issues with anxiety throughout her life. As well as talking about what she's dealt with on a personal level, Nikki also discusses how she's dealt with anxiety, which is sure to help at least one of her many followers. As for the rest of her YouTube channel, Nikki shares lifestyle vlogs, beauty tutorials and even makeup giveaways — a great all rounder to keep an eye on.

This video is a little less personal than the rest, but that doesn't mean it's of any less worth. It takes a more professional approach to discussing anxiety, but Sophie confirms that these tips and tricks all come from her own experiences.

Loey uses her channel to talk about everything from eyeshadows to social justice, so it only follows that this vlogger would be open about her mental health too. In this incredibly honest and moving video, Loey discusses an issue that is almost invisible in our society: Fat people with eating disorders. If you're looking for a YouTuber who you can connect with emotionally, Loey is your gal.

In this one of her "Chit Chat" videos — where Kat diverges from her killer makeup tutorials to talk about something different — Kat opens up about having PTSD, borderline personality disorder, anxiety, and depression. She's open about how she is struggling with her mental illnesses, as well as discussing the stigma against mental health issues not just in our society, but specifically in the black community.

This video is powerful in its approach: Kat doesn't speak as though she has gotten over these illnesses but is instead explaining how she struggles with them currently. It's an important message to anyone who isn't at the top of their game right now: You are not alone.

Lyss recounts all the issues she's dealt with because of mental health problems from the time she was 14 to now. While she doesn't specify any mental illness, her experiences with dealing with a negative mental space is almost universal. It's a strong reminder you don't need a diagnosis to understand the impacts of poor mental health.

Kathleen doesn't just use her platform to discuss her experiences with anxiety, but to give advice that may help others with their anxiety. Every so often Kathleen takes the time out of her usual scheduled beauty videos to discuss something personal to her, which is a great reminder that there's an actual human being behind the big YouTube personalities we see on the daily.

Brenna shared this heartwarming video on her experience with OCD to specifically reach out to others who may have the same disorder, as well as giving her story, Brenna links to articles and websites that may help anyone struggling with mental illness. The rest of her channel mirrors the bubbly personality we see in this video, where she gives countless, amazing makeup tutorials.

This video by Jordan Liberty isn't specifically about mental health, nor is it specifically about coming out as gay. More specifically, Liberty discusses how makeup and beauty was a great tool for overcoming issues with anxiety in his life. Although a non-queer person may not be able to empathize with the coming out narrative, the story on anxiety, depression, and how makeup transformed his life is incredibly universal.

Ruth's video on schizophrenia discusses a type of mental health that isn't spoken about often enough. Her video really helps to humanize a disorder that is often misrepresented in the media. This two part series of videos in among Ruth's beauty vlogs stands out for putting a face to a condition that is, unfortunately, often demonized and belittled.

While Niki explains she has multiple disorders regarding mental health, this video specifically talks about her struggle with bipolar disorder. What's especially uplifting about this video is that, as Niki discusses, it's been inspired by the video of another YouTuber discussing mental health. This video stands as proof that an open dialogue about mental health doesn't just benefit others, but spreads the word and positivity further than just one audience.

Another video that doesn't just discuss anxiety, depression, and panic attacks, but addresses ways to combat these issues. In this video, Melanie draws upon personal experience in her best effort to help others and going from the comments? Her advice really has helped those who have viewed the video.

Danielle's channel is so great because it doesn't separate the mental health discussions from the adoration with makeup: Instead Danielle mashes up the two to create "makeup therapy" sessions. In these videos, Danielle discusses everything you could want to know about her experiences with being bipolar, all while delivering you some stunning tutorials.

There's no way to convey how important these videos are without watching them yourself, because only then can you connect with these people on a level that's about so much more than beauty tips and fashion DIYs. This diverse group of people help to represent that mental illness affects more people than you may realize and also, that there is nothing weak about being honest about your mental health.