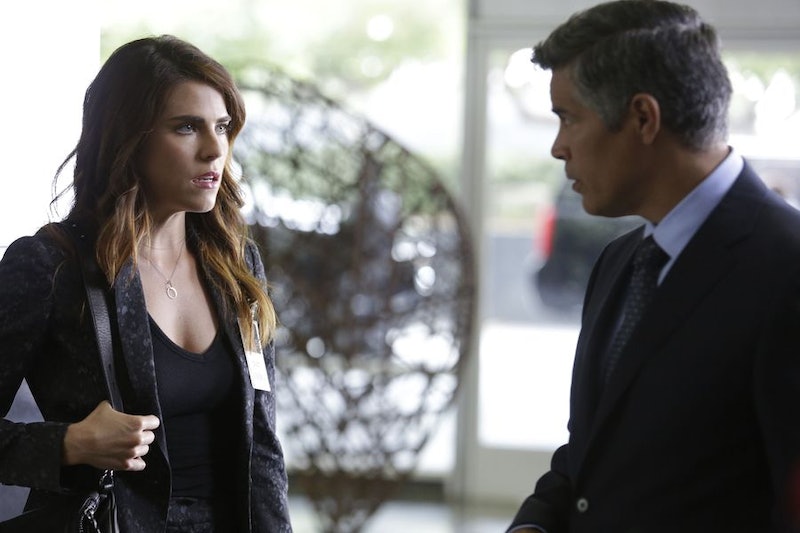 Poor Laurel. The law student definitely doesn't have a great track record when it comes to shady people entering her life. Obviously, Annalise's presence in her post-graduate education has complicated things, as has her romantic relationship with the now-elusive Frank. It's a shame because, of all the members of the Keating Five, it's Laurel who seems to have her morals the most together — though it might not be the case with the rest of Laurel's family. Laurel's father will appear on How To Get Away With Murder, and though we already saw him in a flashback sequence, he's definitely going to be stirring things up in present day on Season 3. So who is Laurel's father? Here's what we know about the man who raised our girl.

Laurel's father may look a little different this time around. Actor José Zúñiga portrayed the character in the Season 1 episode "Best Christmas Ever," but it seems that the show has re-casted the role for his appearance in Season 3's episode "Always Bet Black." From Dusk Till Dawn: The Series actor Esai Morales has taken over the role as Laurel's father, one that will no doubt involve plenty of secret keeping and power play, if the new sneak peek from Thursday's episode is any indication.

He isn't wrong about the reason Laurel chose to pay her father a visit — she was instructed by Annalise to talk to her father in an effort to find where Frank has been hiding. Why Laurel's dad would know where Frank is speaks to just how powerful this man is, though exactly what he does is a total question mark. Laurel has stayed particularly mum about what her exceedingly wealthy family does, but we know that her father is originally from Mexico, and that he's not allowed to go back there for some unknown reason. Could that reason have to do with why Laurel described her father as "not a good man," and even compared him to the boyfriend she's currently looking for? It seems pretty likely.

Laurel is one of the kindest members of the Keating Five, so having a potential criminal for a father would certainly be surprising. However, perhaps we're misinterpreting what Laurel meant by the fact that her father wasn't a good man. Maybe he has an upstanding job, but, like Frank, has a tendency to treat the women in his life poorly. It wouldn't be the first time a TV character dated someone who reminded them of their own father's worst qualities.

Only time will tell just how bad of a guy Laurel's dad is, but this show is called How To Get Away With Murder. He's bound to have plenty of secrets worth discovering.