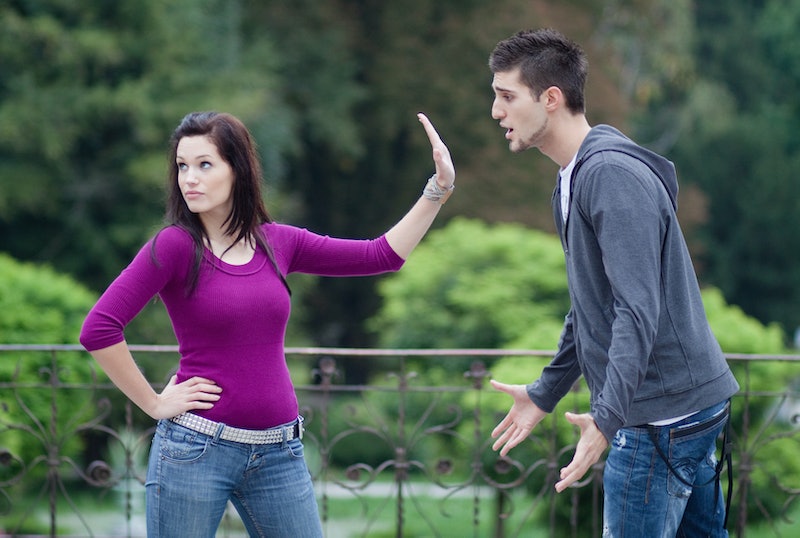 There are some lines you know you should never let a romantic partner hear. For example, “I only got though sex with you by fantasizing about my friend’s new boyfriend.” But there are other, less obviously inappropriate statements that can cause equally serious damage to your relationship.

The key isn’t to avoid being honest or bringing up topics that are bothering you but rather to address them in a way that’s more sensitive and appropriate to the relationship. Here are nine things you should never say to the person you’re dating:

It can be all too tempting to compare your current object of affection to people you've dated in the past. But bringing up ex-loves has a time and a place. As relationship experts Rachel DeAlto and Sheri Meyers, Psy.D., L.M.F.T advise Cosmopolitan readers, it’s rarely a good idea to tell your current flame that his/her negative qualities remind you of your ex.

On the other hand, there’s absolutely room in a close relationship to talk about how you were hurt in the past. In fact, according to marriage and family therapist Toby Salter, love is defined by openness and honesty about our thoughts and feelings. If your current long-term partner is legitimately doing something that reminds you of a painful past experience, try explaining how you were wronged and suggesting how your S.O. could tweak his or her behavior.

Your eye is bound to wander at some point — you're only human. But there’s really no need to tell your S.O. that the barista who’s taking your orders at Starbucks is so cute. The same thing goes for the sexy coworker who shares your cubicle at the office. As long as you’re “harmlessly attracted” to these people, psychotherapist Robi Ludwig, Psy.D. tells Blisstree.com, there’s little value in sharing these personal deets with your partner.

That said, if you suspect that you might be inclined to take the attraction a step further, to physical or emotional infidelity, consider telling your partner about your feelings. Once you verbalize your emotions, the whole fantasy kind of disappears and you’ll realize how close you are to messing up your relationship.

These general statements are almost never productive in a conversation. Instead, psychotherapist Judy Ford, L.C.S.W. tells Woman’s Day readers, they just serve to put your S.O. on the defensive. So if you tell him he never introduces you to his friends, he’ll come back with that time he brought you to meet his entire family. Ford suggests zeroing in on a specific issue (you didn’t introduce me to any of your friends at the party tonight), how it made you feel (I felt embarrassed), and what he or she can do differently next time (introduce me to at least one person, and I’ll take it from there).

If you are maintaining separate finances, it’s probably best to stay out of your partner’s affairs. For one thing, relationship expert Jan Hoisad, Ph.D. tells Cosmopolitan readers, telling him or her what he or she can and can’t afford might make your partner see you as an authority figure — and nothing screams “sexy” like an image of Mom or Dad. And many people consider their finances a crucial part of their ego and identity.

But if you are managing your money together and you feel he or she is spending it unfairly, consider expressing your concern in a calm, sensitive way. Deborah Price, an expert on dealing with finances in relationships, suggests starting from a “we” standpoint, instead of “you.” So try: “Can we talk about our financial plans?”

Maybe you’re fibbing because you don’t want to hurt your partner’s feelings about his or her sexual prowess. But, says Ford, getting truly intimate with someone means admitting that not everything between you two is perfect. Try being honest and telling your partner that no, you didn’t orgasm this time, but you have some ideas about how to bring out the fireworks next time you two get together. There’s a good chance he or she will be more than willing to try them.

6. "How many people have you slept with?"

Going back to that “we’re all human” thing, we’re all naturally curious beings. But there’s no good reason to make your partner (even if she’s Anna Faris) share her number. According to dating coach Evan Marc Katz, “numbers can be deceiving,” meaning that someone who’s actually enjoyed a healthy sex life might be perceived as a player or, alternatively, a prude.

That said, Katz writes, it’s completely reasonable to be concerned about sexually transmitted infections. Instead of subtly hinting at the issue by asking how many people your partner has done the deed with, ask the question straight out: “Do you have any STIs?” (And even if you trust each other, consider getting tested to make absolutely sure.)

Pro tip: Even if someone isn’t your S.O., he or she probably never wants to hear these words. When you’re stressed, the last thing you want to feel is that someone close to you thinks you’re overreacting or acting crazy. Instead of trying to force your partner to act or feel differently, try some sympathy: “I’m just as upset about this as you are. Let’s deal with it together.”

8. "Your parents are terrible."

Because anyone who’s seen Monster-in-Law knows this situation is totally a possibility. In reality, surveys suggest that 75 percent of couples fight with their in-laws, so there’s a good chance that you and your S.O.’s mom aren’t exactly besties.

The solution to this problem isn’t to keep things hidden from your partner. Instead, sexuality educator Yvonne K. Fulbright, Ph.D., writes on PsychologyToday.com, you should make your partner aware of how his or family is treating you. Focus on how you feel (hurt, betrayed, frustrated), instead of all the mistakes the family made. And remember, be respectful. Think about how you’d want your partner to talk about your family if the situation were reversed.

There are probably a million sarcastic ways to answer the question, “Honey, does this outfit make me look fat?” But body-image issues are serious, and if you really care about your partner, you shouldn’t take those issues lightly. Instead of dismissing his or her comments and questions, try responding in ways that show your S.O. you like him or her just as he or she is. (“I don’t think you look fat in those jeans. You look sexy as usual to me.”)

If the comments continue, consider being blunt and telling your partner that he or she needs to learn to accept him or herself. A statement like, “You are worth so much more than your looks to me and to others” can be pretty powerful, if you mean it.

More like this
20 Things You Should Never Tolerate In A Relationship
By Rachel Sanoff and Kathleen Ferraro
The Best Time To Date After A Breakup, According To Experts
By Bustle Editors
12 Ways You're Sabotaging Your Love Life
By Teresa Newsome and Lexi Inks
Are Virgo & Capricorn Compatible In A Relationship?
By Kristine Fellizar
Get Even More From Bustle — Sign Up For The Newsletter