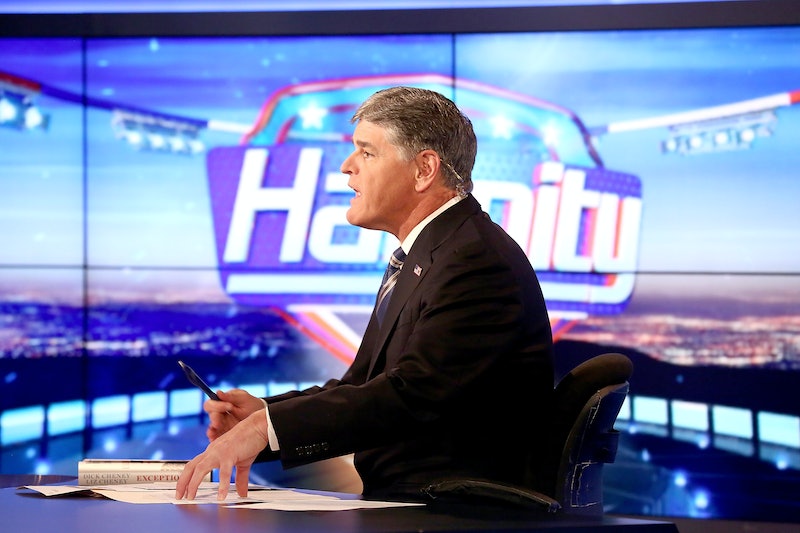 Something beautiful happened on Fox News recently, and I'm not taking about the resignation of former Fox News CEO Roger Ailes. There was the faintest detection of a balanced conversation that involved Sean Hannity, and by that I mean an actual "fair and balanced" conversation that may have transpired on Wednesday night (sort of). So how about that Megyn Kelly and Sean Hannity clash, huh?

Just in case you happened to miss the spar in the whirlwind of news this week, here's a rundown of what happened between Kelly and Hannity on Wednesday night: Kelly was interviewing political consultant Stuart Stevens, the chief consultant for the Mitt Romney 2012 presidential campaign. Kelly and Stevens were discussing voter outreach and how both candidates could better appeal to the "middle ground," a topic that has been widely discussed in various media outlets, when Kelly took a swipe at her colleague and Trump.

“Donald Trump, with all due respect to my friend at 10 o’clock, will go on Hannity and pretty much only Hannity and will not venture out to the unsafe spaces these days, which doesn’t exactly expand the tent for either one of them. There. That’s my two cents," Kelly said. And Hannity didn't take too well to the attack, tweeting that "@megynkelly u should be mad at @HillaryClinton Clearly you support her. And @realDonaldTrump did talk to u."

Hannity, host of Hannity for Fox and the syndicated radio talk show The Sean Hannity Show, has said he is "not a journalist," and has made no pretenses about his support for Trump. In addition to the friendly and cozy setting Hannity has provided for the GOP candidate, much in the vein of other Fox News programs such as Fox and Friends and The O'Reilly Factor, Hannity recently appeared in a political video endorsing Trump. That video was met with some extensive criticism, and the network told Politico in a statement that Hannity "would not be doing anything along those lines for the remainder of the election season."

The anchor often spends time defending Trump. When he has him as a guest, he typically throws him open-ended, softball questions. When Trump refused to denounce former Ku Klux Klan leader David Duke after Duke threw his support behind him, Hannity said to Trump regarding the primary debate hosted by CNBC, "I felt [moderator] John Harwood was extraordinarily unfair to you and attacking you. ... I've got to imagine that that's pretty aggravating for you. What's your reaction to it?"

After the first presidential debate on Sept. 26, Trump interviewed with Hannity and Fox and Friends, denying interview requests from major networks such as NBC, ABC, and CNN.

So, what was Kelly really saying when she made her comment about Trump and Hannity? In all fairness to Kelly, she has reached out to Trump for interviews after the now-infamous feud between the anchor and the GOP candidate. The two had a sit-down interview in April, where Kelly said the two "had a chance to clear the air," and she did have a chance to interview him in May.

But her comments about Trump are pretty well-documented, as it is widely known that Trump denies reporters access to his rallies.

Her guest Stevens had made similar comments back in August during a CNNMoney interview, where Stevens aptly pointed out that Trump was "not sitting down with Megyn Kelly, other than that one time in May. He's not sitting down with Chris Wallace. It's just a comfort zone."

Kelly, an intrepid reporter and one of the superstars for the network, gave a pretty well-rounded attack, also calling out Clinton for what she said were selective TV appearances. She mentioned the advanced questions that Clinton received when she appeared on The Steve Harvey Show, and said both candidates seemed to be in some sort of a media “presidential protection program.” After making such comments, it's a little difficult to follow Hannity's logic for saying that Kelly is "clearly" a Clinton supporter, but then again, this is Hannity we are talking about.