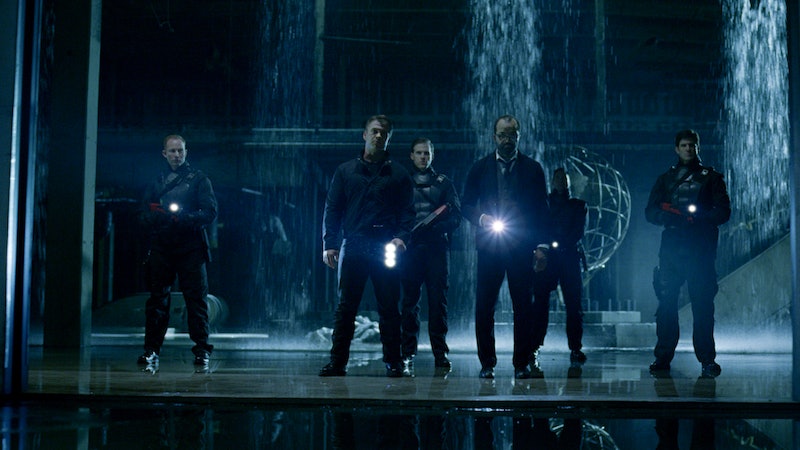 If you weren't too busy questioning everything you know about ethics or whether or not you were a robot during HBO's latest premiere, you may have caught half of a familiar name in the credits. Yes, Luke Hemsworth on Westworld is related to Chris and Liam Hemsworth. As if two weren't enough, the oldest Hemsworth is an actor as well. He's the Elizabeth Olsen of Hemsworths. The William Baldwin of Australia. No word yet on whether or not Rooney and Kate Mara have a secret third sister, but this definitely strengthens my theory that one is out there somewhere, waiting.

Chris Hemsworth is known for his roles as a Huntsman and an Avenger, as well as Ghostbusters and The Cabin In The Woods. Liam Hemsworth you know from The Hunger Games and Independence Day: Resurgence. That leaves Luke Hemsworth, who plays Stubbs on the HBO series, has not broken out in Hollywood yet, but has been seen in films like Kill Me Three Times, Infini, and The Reckoning. Fun fact: all three Hemsworth brothers appeared in the Australian soap opera Neighbours .

Entertainment Tonight calls Luke "the chillest Hemsworth," citing his Instagram as evidence. MTV, on the other hand, refers to him as "the most elusive Hemsworth," as evidenced by Twitter reactions to discovering the third brother for the first time during the Westworld series premiere. Call me crazy, but I think he's just an Australian actor who didn't cross the other pond (a phrase I'm trying to coin) as early as his younger brothers.

"I'm the short, dumb brother," joked Luke in an interview with Fox News Entertainment. It's not a competition for him. He's just doing his thing. "I take their advice but as their older brother a part of me also says, ‘Oh, shut up,'" he said. As far as American audiences go, Westworld is his big break. I, for one, welcome any any all Hemsworths onto my TV screen. The more the merrier!

More like this
Chris Hemsworth Is Taking Time Off From Acting Due To Alzheimer's Predisposition
By Jake Viswanath
Jodie Turner-Smith & Joshua Jackson's Relationship Timeline Includes Her Proposing
By Jake Viswanath
J.Lo Wants To Make A Sequel To This Movie With Ben Affleck
By Jake Viswanath
Hugh Jackman Shared The Sweetest Tribute To His “Extraordinary” Wife
By El Hunt
Get Even More From Bustle — Sign Up For The Newsletter