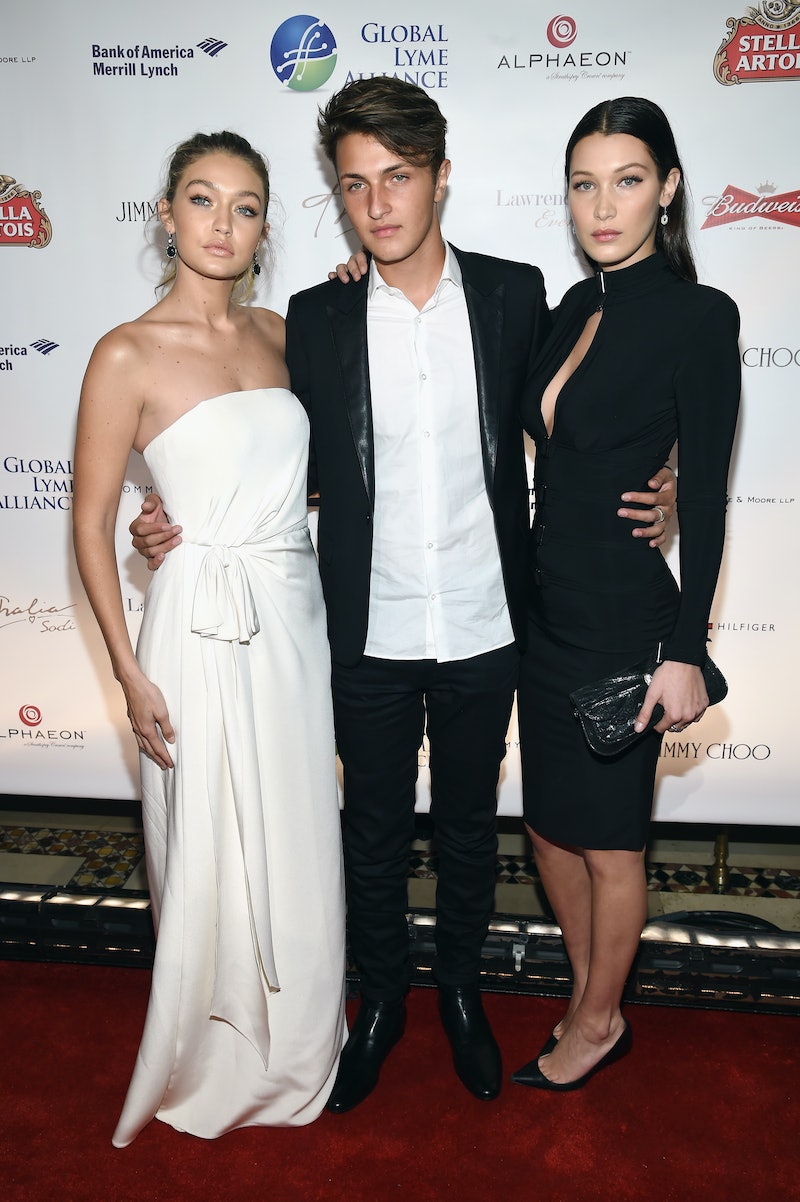 It's not uncommon for talented famous people to have equally talented famous siblings who venture on a similar career path in Hollywood, whether it's acting or singing or something else altogether. But a lot of times, the famous sets of siblings have other siblings who choose to remain out of the spotlight. Yep, for every famous set of siblings like the Gyllenhaals, the Kardashians, and the Fannings, there are those famous families with siblings we never hear about. Sure, everyone knows about Liam and Chris Hemsworth... but did you know they have another (equally attractive) brother named Luke who acts in their native Australia? Mind. Blown!

The Hemsworths aren't the only Hollywood pair with a sibling who manages to receive less media attention. I bet you didn’t know that Kelly and Jack Osbourne have a sister named Aimee who didn’t appear on The Osbournes. Similarly, there’s a fourth Jonas brother named Frankie who wasn’t in the band, as he’s still in high school! These famous families have crazy talent, and all I can think about is how fun Christmas must be in the Cyrus household, or how awesome the closets of the Olsen siblings must be. A girl can dream, can’t she?

It's well-known that Britney and her younger sister, Jamie Lynn, were bit by the music bug as children, but many people don't know that the Spears clan is actually a trio! Bryan is about five years older than Britney and works as a film and TV producer. He largely stays out of the spotlight, but all three Spears children get together with their children often, which is just the sweetest thing ever.

The Osbournes are one of the most famous reality TV families ever, so that's why it's so shocking to learn that Jack and Kelly have an older sister named Aimee! Aimee did not want to appear on the wildly popular MTV show of her family's namesake, so she moved out of the family home just as camera crews moved in. While often cast as a "recluse" or "hermit," she's actually forging her own music career as a singer named ARO (her initials) and lives in London while she pursues her music career.

Model good looks clearly come in spades in this family! Bella and Gigi have made a name for themselves in the modeling world, and their baby brother Anwar is already well on his way to the same runway domination as his older sisters. Like his sisters, he occasionally appears on mom Yolanda Foster's reality show The Real Housewives of Beverly Hills, and it was recently revealed that he is also struggling with Lyme disease, just like his mom and Bella.

It's true that the Jonas Brothers melted tween hearts around the globe during their run as massive Disney stars, only their biggest fans knew about the "bonus Jonas" named Frankie. Yep, he's just 15 and has appeared in various Jonas Brothers projects over the years, but told Paper magazine that right now, he's simply focused on finishing high school. How cute!

Kate is famous for being, obviously, a real-life Princess, and her sister Pippa has courted plenty of media attention in recent years due to her love life and envy-inducing style to rival her sister's, but few people know about their younger brother James! He's at the helm of a successful cake baking business and has admitted it's frustrating having such a famous sister like Kate. Totally understandable!

Though they're one of the most famous families on the planet, few people know about Caitlyn Jenner's children with her ex-wives Chrystie Crownover and Linda Thompson. Long before Caitlyn married Kris Jenner and formed a real-life Brady Bunch, she was first married to Crownover, and together they had babies Burton and Cassandra, more commonly known as Burt and Casey. After their split, Caitlyn married Thompson and they welcomed Brandon and Sam (Brody), both of whom have been featured on Keeping Up With the Kardashians. Later on, of course, Caitlyn married Kris Jenner, and they had daughters Kylie and Kendall. And the rest was reality TV history!

Though Liam and Chris have become two of Hollywood's most famous actors, few people stateside know about their equally adorable older brother Luke, who has a pretty impressive career as a soap actor in their native Australia. The trio spend lots of quality family time together, pretty much confirming that they are too perfect to be real.

By now, it's well-known that Mary-Kate and Ashley's younger sister, Elizabeth, has made a name for herself in the acting world with a vast range of projects from indies like Martha Marcy May Marlene to big-budget blockbusters like Avengers: Age of Ultron, but the Olsen family has another cute sibling: brother James "Trent" Olsen! Trent mainly works behind the scenes for a production company in Hollywood, but the sibling love is strong: Mary-Kate and Ashley named their popular clothing line Elizabeth and James after their sibs. Aw!

Paris and Nicky stole the spotlight as their fame grew in the early 2000s, but their younger brothers Barron and Conrad are the ones to watch these days. It's rumored that Barron has plans to also join the hotel business, which definitely shouldn't come as much surprise, and Conrad has unfortunately had a few brushes with the law in recent years. Those Hiltons are always up to something!

Most people are very familiar with Owen and Luke Wilson thanks to their illustrious 20-plus year acting career, but few know about their older brother Andrew, who is also an actor and film director. In fact, the three have worked together on several projects, including 2005's The Wendell Baker Story and 1996's Bottle Rocket. Talent clearly runs in this family!

Lots of people know Nick and Aaron Carter for their success in the music world — but the Carter brood is actually quite a large one! Aaron has a twin named Angel, and they also have a sister named Bobbie Jean. Sadly, another sister, Leslie Carter, died at the age of 25, causing a rift in the family, according to Nick.

James and Dave are known for their success in films, but their older brother Tom is an artist and founder of the Firehouse Art Collective in Berkeley, California. He admits there was pressure "to do something" artistic due to James' success as an actor, but I'd say all three Franco boys are making their parents more than proud these days.

Candace Cameron-Bure and her big brother Kirk lit up prime time TV in the '80s and '90s in their respective roles on Full House and Growing Pains, but their sisters Melissa and Bridgette have largely avoided the spotlight. Bridgette is a mom of three with husband John Ridenour, and Melissa owns a Christian-based toy company with her husband, Jason Fleming. They have four children.

Miley may be the most well-known of the second generation Cyrus set, but her siblings are all pretty talented in their own right. Brother Trace has followed in Miley and dad Billy Ray's footsteps as the vocalist and lead guitarist in Metro Station, and sisters Noah and Brandi are both pursuing acting careers. Braison is also a model/actor, and they also have a paternal half-brother named Christopher. Whew! Did you catch all of that?

Although some of these siblings decided to pursue careers away from the spotlight, I can't help but want to see more adorable family photos. There's nothing like sibling love!