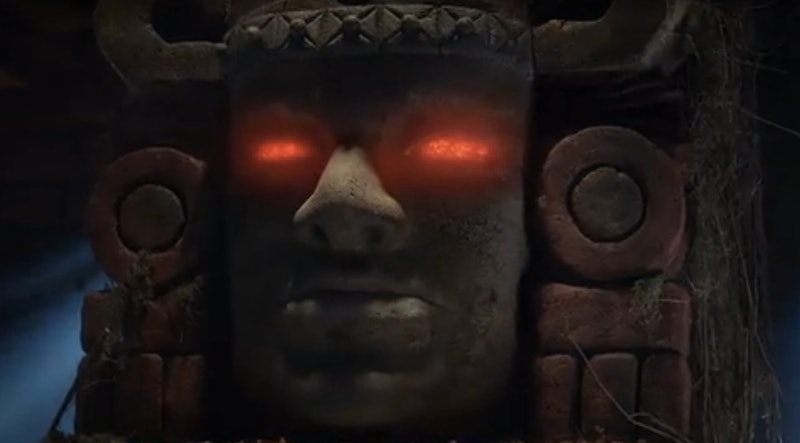 In case you haven't noticed, the '90s never died. The last year or so has been the dawn of the reboot and revival, and in most cases, it's been great to revisit the decade. But, something about the Legends of the Hidden Temple movie makes me think this might be the greatest revival so far. Though the original Nickelodeon film, due to air on the network Nov. 26, is an obvious departure from the iconic game show — there is no competition between teams of kids to win prizes — the story, inspired by the series, has the perfect amount of nods to the original show, which already makes it flaw-free, in my opinion. All '90s kids, rejoice.

According to Entertainment Weekly, who debuted the film's trailer Thursday, the story will follow three siblings, Sadie, Noah, and Dudley, who stray from a jungle tour and find themselves in a series of intense challenges they must face to make it out of the course alive. EW also says the characters may have to "win a Pendant of life or two." If that doesn't make you squeal, get a load of this: Original host Kirk Fogg will star in the film and the legendary Olmec returns with the voice of Dee Bradley Baker.

That's just the beginning. Check out the greatest moments from the trailer that every '90s kid will love more than life itself.

1. This First Glimpse Of The Obstacle Course

Which is just a larger-than-life depiction of what I pictured as a kid.

The tradition lives on.

3. This First Look At Olmec

The greatest spiritual guide of the '90s.

4. The Epic Shirt This Kid Is Wearing

Repping the green monkeys in attire I dreamt of wearing as a kid.

5. An Intense Version Of The Game's Stairs

They were equally as intimidating back then.

Behold, the shrine of the silver monkey.

And he hasn't aged a day.

8. This Intimidating Plummet To Death

Again, was still terrifying back in the day.

9. The Foggy Floor Of Mystery

Pretty sure the original fog haunted my dreams.

Clearly paying ode to the team in the show of the same name. The movie will reportedly also have a green monkey, silver snake, and others. EEK.

The actual stuff of nightmares.

15. An Up Close Look At The Iconic Helmet

The armor of true gladiators.

16. And One Last Look At Olmec To Keep The Dream Alive

The truest legend of the temple.

It looks like the movie will bring all of the best aspects of the show to life, and they'll be even more magical than I had ever envisioned. You better believe I will be in front of my TV, with popcorn on Nov. 26. Check out the full trailer on EW .