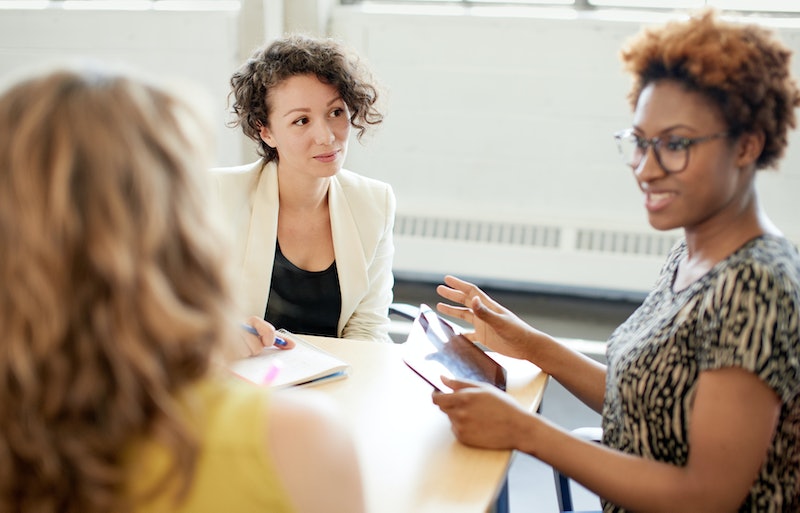 There are a lot of issues when it comes to gender equality in tech, but when it comes to gender bias in the hiring process, there might be one thing that the industry can do to begin changing things: New research suggests that gender-blind job applications make tech hiring more equitable. And while a gender-blind job hiring process isn't necessarily a solution in and of itself to the larger issues of gender bias in the work place, it could still go a long way to closing the gender gap in the tech world.

Last week, an op-ed that suggested women working in the tech industry should consider using their initials instead of their full names in their professional lives caused controversy; the implication placed the onus on women to work around the sexism rife throughout the industry, rather than addressing the itself. The author later apologized for the piece, and most people were able to agree that expecting women to try to work around sexism is not the solution to inequality in the tech world. But this, of course, still begs the question: What is?

When the gender was obvious, only five percent of the applicants employers chose for an interview were women. However, when applications were gender-blind, women made up a whopping 54 percent of applicants chosen for follow-ups.

These figures suggest a few things. First and foremost, it should make it obvious that there really isn't much merit in the frequently-heard argument that women make up a smaller share of tech employees because fewer women are interested in tech. But it's obvious here that employers are biased (consciously or unconsciously) against women applicants.

And at first glance, this might suggest to some people that women really should start disguising their identity by using their initials. But I would argue that what it actually suggests is that the tech industry — if they really are serious about gender equality and equal opportunity — should start using a gender-blind application process as a smaller part of a larger solution to a huge, glaring problem.

In other words, if the tech industry as a whole is incapable of treating women fairly in evaluating them for a job, it is the duty of the industry to change their hiring practices. And thus, gender-blind applications sound like a great idea as part of the road to bigger changes.

Obviously, gender-blind applications will not eliminate all the problems of sexism in the tech world. For instance, many women in the tech industry have also complained about how the culture at many companies is unfriendly for women employees. And in the long run, you would hope that the industry will break down sexist assumptions on a wide enough scale that gender-blind applications are no longer necessary.

But in the mean time, if the industry really wants to provide equal opportunity for all applicants, they should also start making changes to their own application process. It won't solve everything, but it would be a great place to start.

It's certainly better than just leaving women on their own to try to avoid sexism and discrimination.