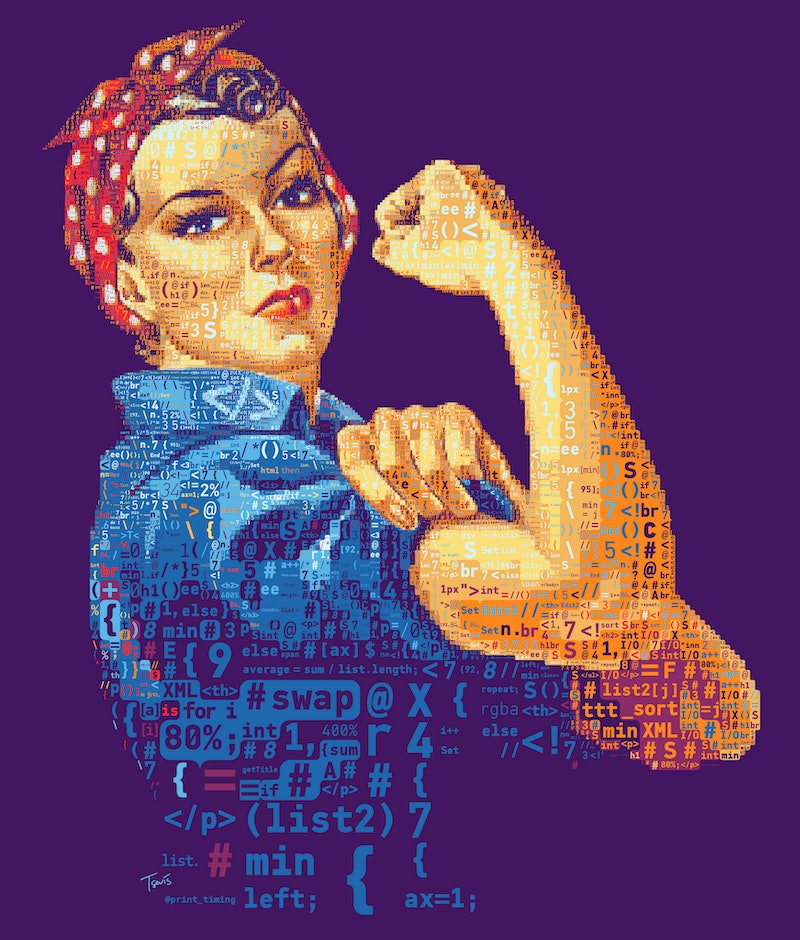 When it comes to the confronting the many challenges women in tech face, it's easy to feel discouraged. Just last week, Yahoo CEO Marissa Mayer herself appeared tone-deaf to the very real obstacles women in the industry contend with when she claimed (granted, to much backlash) that “There are probably industries where gender is more of an issue, but our industry is not one where I think that’s relevant.” When there aren't the deniers to contend with, there are the lawsuits and controversies: There's Reddit CEO Ellen Pao's ongoing gender discrimination lawsuit, which alleges that she was frequently sexually harassed at the very company she led. Oh, and then there's mother-f---ing everything about Gamergate.

As if all that weren't enough to make you want to hide under a non-sexist rock, there are also the damning statistics around women's representation in tech:

So what's a woman in tech — or a company who wants to support women in the industry — to do?

Luckily, there are experts out there with some suggestions. Bustle spoke to Elizabeth Ames, Vice President, Strategic Marketing and Alliances at the Anita Borg Institute, a social enterprise dedicated to increasing the influence and number of women in tech. Ames is speaking next Tuesday at South By Southwest in Austin on this very topic, and she shared several concrete steps she believes companies, women, and men can take to ensure that women succeed in the tech industry.

What Tech Companies Can Do

1. Make A Commitment From The Top

"A commitment is a requirement. It's not just the 'fair thing to do' — these companies need technical talent. Women represent half of the intellectual capital. If they want to attract the best and the brightest — [and] trust me, women are some of the best and the brightest — there has to be a commitment from the top to increase the percent of women at their companies."

2. Put Structures In Place For Accountability and Measurement

There also need to be surveys [of female employees]. Do the women feel comfortable at work? Do people feel like they're being treated equitably? You should be looking at your systems to understand where there are biases."

3. Recognize When Bias Is Built Into The Hiring Process

"One of the practices we recommend in terms of recruiting is that when you define a job you're going to hire for, you have to define what you're looking for. Is someone's experience or someone's education your top priority? And then, don't shift those priorities. If you decide education is your priority over experience for a certain position, than apply that rule strictly to your decision-making process, whether you're interviewing a woman or a man."

"One recommendation I heard from another woman in tech [is that when you're trying to decide whether to work somewhere] go look in the refrigerator. If they have a lot of beer, decide if that's a culture you're going to be comfortable in. If in the recreation area all they have are foosball tables and video games, is that a culture you're going to like? It's a great indicator of their culture.

I gave this recommendation to a bunch of men who were senior executives, and they were like, 'Foosball tables? That's a guy thing? I thought everyone loved foosball tables!' — and they meant it. It had just never occurred to them. And a colleague said, 'Yeah, think about it like a family room. If you have a daughter and a son, you put things in the playroom for both of them.'

Companies should think, 'What's the message that we're sending with the culture we're creating here? Is it beer pong all the time?'"

What Women In Tech Can Do

1. Understand What You're Up Against & How To Work Around It

"Educate yourself on the major types of things you're going to come up against: those are things like unconscious bias, stereotyping, stereotype threat (feeling like you have to represent your own gender); like-ability penalty; and micro-inequities (the kinds of things like where you're getting shut out of a leadership meeting) — and then understand how to work around them.

Here's an the example of how the likeability penalty [plays out]: If you do self-promote, you're seen as pushy and aggressive, and so you're not as well-liked, and it works against you. But you can diffuse that: Get someone else to toot your horn. If you can find and identify other people who can go to the person you want to influence and say 'You know, Elizabeth did a fabulous job on x project and you should really promote her.' That will help you.

2. Find a Good Network Of Other Women

"Find a good community [of other women in your field]. A network can help you through a lot of these problems. They can help you understand what's going on, and they can reduce your sense of isolation. They can keep you going when things get tough."

3. Be An Advocate For Other Women At Work

"Be aware of women being pitted against each other. Be aware when someone else is talking over another woman — help each other. If a woman says something and everyone ignores it — but then a man repeats the same idea later — say, 'Well, Kim said that five minutes ago.' Or if they're talking over another woman, say, 'I'd like to hear what Kim has to say,' so that you can build a scaffolding where you're all heard."

4. Know The Difference Between 'Communal' And 'Agentic' Language

"If you have a manager who's asking you to do a assessment, make sure you're using language about delivering results.

There's terms to help you think about this — communal vs agentic language. Agentic language is more about agency, and it's the way we think about people who are leaders. (Eg. 'They commanded the room, they led the team.') What you want to do is make sure you're using that language when you're describing yourself.

If you're finding in a review that someone is just using communal language (how you interact with other people, who likable you are, how good you are on a team) to describe you, go back and say, 'Here are the things that I accomplished. And I think that these things should be in my annual review.'"

What Men In Tech Can Do

1. Advocate For Women In The Boardroom

"One woman I know gets asked to speak on panels a lot, and she said, 'I only accept speaking on panels if there's at least one other woman. I don't want to be the token woman.'

And one of her male colleagues seized on that and said, 'Maybe I should say I'm not going to any meetings unless there's at least two women in the room.' It got him thinking about little things he could do like that that would shift things."

2. Be Aware Of Times When People Are Talking Over Women

"And invite women to share what they have to say. Ask 'What are you thinking about this?' Of course, women can feel put on the spot in those circumstances, so the other suggestion is to circle back around after the meeting, find that woman and say 'I noticed you were quiet — did you have any thoughts that you would like to add? How can I help amplify your voice in this environment?'"

3. Be Open To Suggestions For Improvement

"I don't think we can expect men to be perfect, so we have to recognize when they're being well-intentioned and help them understand how to do it. I have found many men get beat up because they said it the wrong way. So women have to take the time to educate them, and they need to listen."

More like this
Sandra Bullock, Girlboss Extraordinaire
By Matt Harkins & Viviana Olen
TikTok Is Using A Kendrick Lamar Song To Post Thirst Traps
By Courtney Young
What Does “Gatekeeping” Mean On TikTok? The Viral Term, Explained.
By Courtney Young
How To Use The Shook Filter On Snapchat, TikTok, & Instagram
By Emma Carey
Get Even More From Bustle — Sign Up For The Newsletter