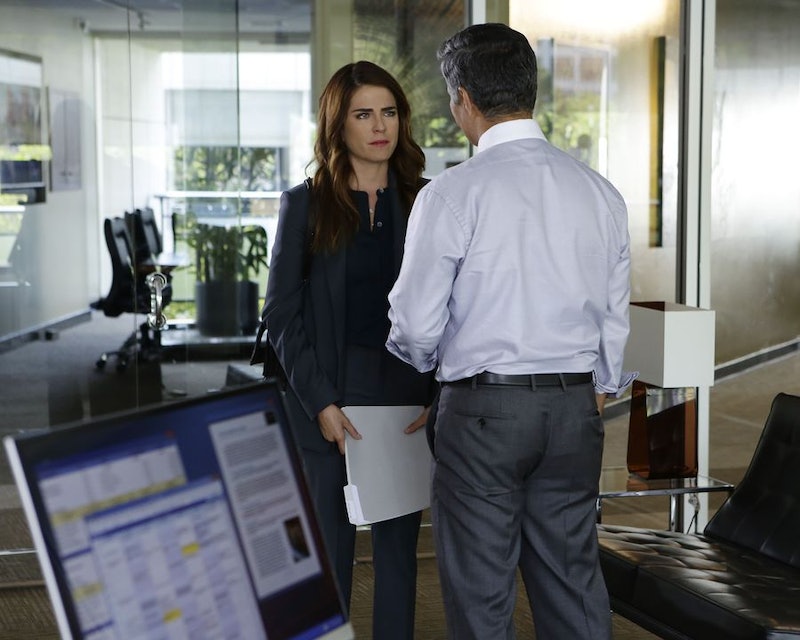 Laurel has been saying since the beginning of How To Get Away With Murder that her dad was not the nicest of guys, and we got a little glimpse of it in the episode in Season 1 where she went home to her family. Season 3 brings a closer glimpse of Laurel and her father’s relationship and just how far Laurel is willing to go to bring Frank back on How To Get Away With Murder .

Annalise and Bonnie have Laurel using her feminine wiles to get Frank back, and when all else fails, she goes to her father. I’m not exactly what he does, but he’s powerful, and he wants her to sign some paperwork to help him launder property or money or something highly illegal. Laurel’s father has been tapping her phone, so he knows all about Frank and their relationship — much to her chagrin. Laurel has been resisting her father for many years (we got a glimpse into all the bad things he’s done, including leaving her mother and letting her get kidnapped when she was 16), but when it comes to Frank, she’s helpless. After Frank calls her, she realizes she wants to protect him from Annalise (didn’t know Annalise hired a hit man to kill Frank there!), and Laurel signs her dad’s dirty paperwork. Back in Philadelphia, Laurel reports leaving her father in the dust and not finding out where Frank is. Oh, love is so blind, isn’t it?

I’m admittedly so into Frank (a little less now that he’s shaved his beard, but he’s still on my list), so I can see how Frank could blind Laurel, but I think she has serious feelings for Frank and wants to protect him. I mean, she went into business with her father to protect Frank, and that’s definitely going to come back to bite her. Do we think Bonnie believed that she couldn’t find Frank’s whereabouts? Bonnie knows everything. Frankly, I’d be more scared of Bonnie than dad.