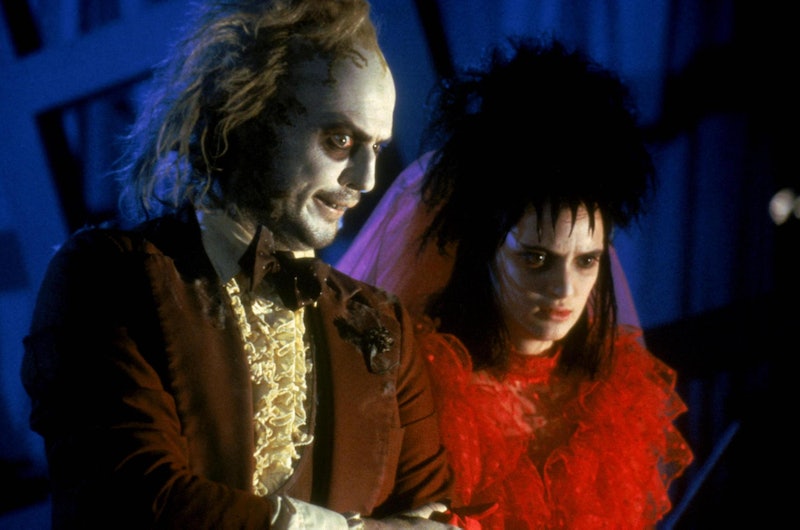 For many people, the spirit of Halloween means hunting down the absolute spookiest, scariest, and goriest horror films known to mankind and watching them in a trembling mass with your favorite friends. But Halloween isn't just about jump scares and creepiness; it's also a great time to have fun, get silly and to party. And there are countless '90s films that are perfect to watch on Halloween for this exact reason. They might not give you nightmares, but they will give you a great time. After all, some of the best Halloween films of all time understand that dialing up the campy, silly, and delightfully morbid side of the festivities is where most of the fun lies. Well, that and being able to eat an entire bowl of candy corn in one sitting.

From family films to ludicrous slashers and sing-along favorites to sleepover classics, the '90s were a time when Halloween reigned supreme. Where films were happy to celebrate the darker side of the human condition with tremendous glee, and where we, as an audience, lapped it up just as gleefully. If you're stuck for ideas on what to watch this Halloween, then it might be worth taking a step back in time and treating yourself to any one of these 16 '90s Halloween classics.

Listen, as far as I'm concerned, it simply doesn't feel like Halloween unless you've watched Hocus Pocus. Bette Middler's rendition of "I Put A Spell On You" is still one of my all-time favorite songs to play while getting ready for a Halloween party.

Not only is this cult horror-comedy set perfectly at Halloween, but it also stars an on fleek Devon Sawa alongside an undead Seth Green and Elden Henson (who you probably know better as Foggy Nelson from Daredevil). It's crude and dumb and hilarious.

3. The Nightmare Before Christmas

Though the debate still rages as to whether it's more of a Halloween or a Christmas film, I'd like to think that it's perfect for both. And, as far as Halloween films go, The Nightmare Before Christmas is the ultimate for enjoying a spooky sing-along to.

OK, so Earnest Scared Stupid is pretty silly, but it's still so much fun for how nostalgic it is to watch. Plus, the troll that turns children into dolls is still legitimately terrifying. I don't care how old you are.

It's a '90s horror classic, sure, but Scream is also more fun than most horror movies of it's kind making it perfect for a Halloween rewatch. Plus, there's something so spooky about hanging out with friends on Halloween whilst watching a horror movie in which a bunch of pals hang out together to watch Halloween.

For me, Casper easily represents the whimsy of childhood nostalgic Halloween. The film is sweet, funny, adorable, spooky, and lavishes in its own morbid sense of fun. The film also gives you that perfect opportunity to relive that mega awkward crush you had on Casper in human form (Devon Sawa again. That guy was all over the '90s).

As well as including that incredibly '90s horror trope of "there's a killer on the loose, so let's throw a party," Urban Legend also sports Joshua Jackson during his precious peroxide-Pacey-Witter phase, Jared Leto as a moody college journalist, and some of the most ludicrous murder concepts of the entire '90s. In short — it's pretty legendary.

I don't know how you feel, but I still absolutely wish that Halloweentown was a real place that I could go and happily move into for the rest of my life. Sadly, I'll just have to make do with re-watching this film every Halloween instead.

The night wouldn't feel spookily-festive enough without Halloween Queen Jamie Lee Curtis making an appearance, and, thankfully, the '90s delivered us with Halloween: H2O to make that so. As well as featuring Joseph Gordon-Levitt in a small role, the film also has the dreamy Josh Hartnett and Michelle Williams (AKA Jen Lindley from Dawson's Creek) for you to make heart-eye emojis at throughout.

Tim Burton's re-imagining of the classic tale of Ichabod Crane and the Headless Horseman is full of all the pumpkin-strewn, eerie set pieces that you could possibly want from a Halloween movie.

Nothing screams Halloween like Mary-Kate and Ashley being adventurous little hellions, taking on their poor, possessed great aunt and saving each other's lives from evil.

12. I Know What You Did Last Summer

What this slasher film lacks in Halloween presence, it more than makes up for in how quintessentially '90s it is. Sarah Michelle Gellar, Freddie Prinze Jr., Jennifer Love Hewitt, and Ryan Phillippe in the one movie? I will never get enough of that combo.

The film, which inspired the iconic Disney ride, is also a ton of family fun. It also happens to star a young Kirsten Dunst as an added bonus.

Truly one of the absolute best family spook films going. Snap your fingers, and indulge your inner Wednesday Adams by speaking in a drastic monotone throughout the film to truly get into the spirit of things.

And after you've watched it you know that you have to perform some kind of an elaborate conga-troupe to Harry Belafonte's "Jump In The Line," right? Everyone knows that's the official ruling of Halloween right there.

I also highly recommend that you play light as a feather, stiff as a board with three of your fiercest, most powerful friends whilst watching it. 'Tis the season, after all...

And, like, you're never too old for a sleepover, right? Because that's the absolute best way to enjoy a Halloween movie-fest. So gather your coven of besties, prepare a banquet of snacks, and conjure up a witches brew of a cocktail for everyone to enjoy and do Halloween right.

More like this
Then Vs. Now Photos Of The 'Enchanted' Cast In 2007 & The Sequel's Stars In 2022
By Marina Watts
See 'Twilight' Stars Together Again For A Sweet Cullen "Family Reunion"
By Stephanie Topacio Long
Judi Dench Isn’t The Only Surprise Cameo You’ll See In Christmas Movie Spirited
By Sophie McEvoy
'The Princess Diaries 3' May Go Ahead Without Anne Hathaway
By Darshita Goyal
Get Even More From Bustle — Sign Up For The Newsletter