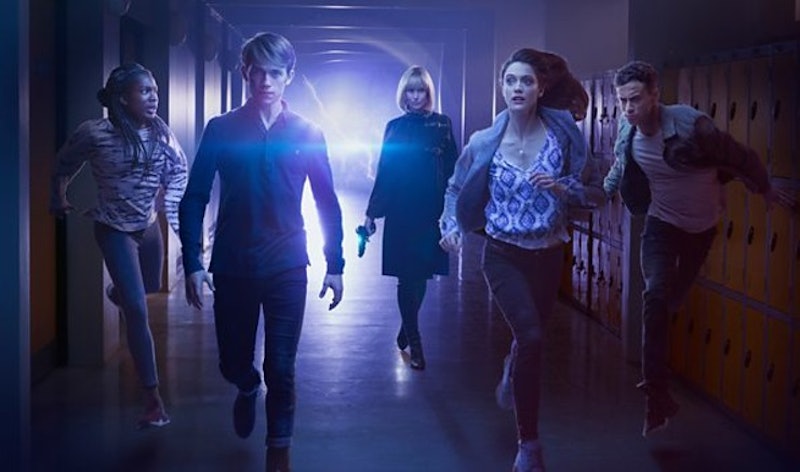 Is there ever such a thing as too much Doctor Who? That was a rhetorical question, obviously, because of course there isn't, which is why lovers of time travel and space are anxiously awaiting the new Doctor Who spin-off, Class . Set to hit the U.S. in spring 2017 on BBC America, this eight-episode series is bound to put all your Whovian feels into overdrive. So you can imagine how thrilled fans were at New York Comic-Con when an official Class trailer was revealed at the BBC America panel. And guess who just so happens to show up? Peter Capaldi as the Doctor, who finds himself back at Coal Hill Academy.

Diehard viewers know that Coal Hill has appeared multiple times throughout the Doctor Who universe. So this series will look to explore "what happens to the people when the Doctor is done with his adventure," the cast explains at Madison Square Garden. So while you'll see the Doctor occasionally make an appearance, make no mistake that this will be an entirely different story that highlights the aftermath of the Doctor's handiwork.

So get pumped to join Greg Austin (Charlie), Sophie Hopkins (April), Fady Elsayed (Ram), and Vivian Oparah (Tanya) for an adventure that's guaranteed to be out of this world (perhaps even quite literally). And given the younger generation this will center around, you can expect some pretty hilarious pop culture references — some of which you'll find in the trailer itself, like Buffy's Hellmouth and even The Vampire Diaries.

Check out the trailer for yourself below: