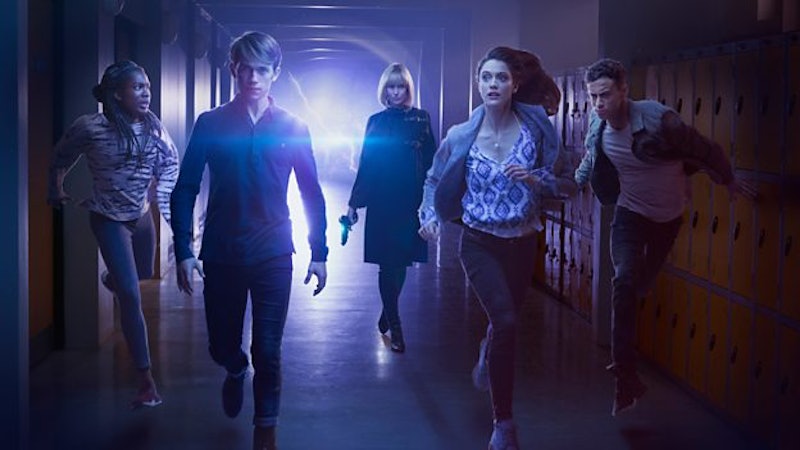 Finding new twists for a show that has been around for more than 50 years is not an easy task, but the new Doctor Who spinoff Class is giving the world of the Doctor an entirely new look while staying true to the classic's two beating hearts. While previous spinoffs The Sarah Jane Adventures let pre-teens get in on the alien fighting action and Torchwood gathered a somber group of adults to do the Doctor's work in Cardiff, Class is delving deep into the lives of four teenagers at the iconic Coal Hill School. Class' secret weapon? Writer and creator Patrick Ness, whose young adult novels A Monster Calls and The Knife of Never Letting Go have been praised for their honest, unflinching depictions of teens.

BBC Three has announced the U.K. premiere date for Class — Oct. 22, 2016 — and released a new video interview with Ness that finally reveals actual information about what Doctor Who fans can expect from the show, and you guys, you are going to love what you hear. Ness promises Class will be, "funny, moving, exciting, scary, sexy and it's true, I hope, to what teenagers feel like their lives are." Basically, it sounds like British Buffy the Vampire Slayer, and that is the stuff dreams are made of.

The Doctor has made plenty of visits to Coal Hill in the past, but this is the first time the ramifications of his visits will be fully felt. Peter Capaldi will guest star in the first episode, but then the Doctor will leave four teenagers — Charlie, April, Ram, and Tanya — to deal with all the time breaches and aliens on their own. They will also have to deal with their home lives, schoolwork, dating, making friends, and growing up with a nary a sonic screwdriver between them. These four normal kids will have to be heroes, but they cannot stop living their normal lives, either.

Doctor Who's formula of racing across time and space saving the day is a beautiful one. The show can never get old because every episode is a new adventure. Just as interesting is all those people the Doctor leaves behind in his wake. Charlie, April, Ram, and Tanya are four of those people, and their stories can be just as rich as that of the Time Lord and his TARDIS.

There are few things quite as intriguing as watching normal people grapple with the extraordinary. Class is set to allow fans to see the world through the eyes of teenagers who will be forced to see beyond their own troubles when all of the crazy alien, time travel business comes flooding into their lives. Doctor Who has had lots of stories inside classrooms before, but the show has never handed the perspective entirely over to the people who visit those classrooms every single day.

Class has the potential to reinvent a corner of the Doctor Who universe by giving its story on an entirely human perspective. If the four teenagers at the show's core prove to be a winning quartet, then Class could be one of the most addictive teen shows ever. Who doesn't love it when supernatural scares and the natural fears of high school collide? It's a TV recipe that has brought fans the likes of Buffy the Vampire Slayer and Teen Wolf in the past, and you know how that turned out.

Whether you are a Doctor Who devotee or not, Class is going to be worth checking out. Ness is a powerful storyteller and he has happened upon the one story in the vast Doctor Who universe that has yet to be told — how does a normal person carry on when the Doctor tasks them with saving the world on the regular? I know I want to see how this plays out when Class premieres stateside in 2017 on BBC America.