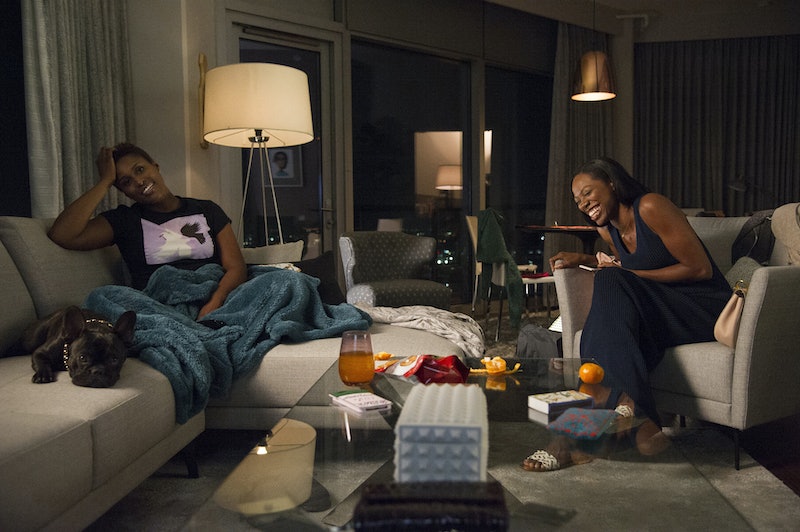 The Insecure series premiere didn't necessarily introduce lead character Issa in a totally flattering light as she kind of broke up with her boyfriend as she was headed out to meet up with an ex. And along with betraying her live-in boyfriend, Issa wasn't a great friend to Molly on Insecure. That doesn't mean you won't like Issa, — on the contrary, you're probably going to love her — it just means that this woman is flawed. As Molly forgave her by the end of the episode, you will too and this complicated, relatable friendship is probably the thing I'm most excited to see progress on this new HBO series.

When you're Insecure, your problems have a tendency to take center stage, which was what Issa did quite literally during the show's premiere. You get so concerned about your life and how you feel that it ends up making you unintentionally self-centered. Well, that's exactly what happened when Issa used her BFF Molly's "broken p*ssy" crisis as a front to go stalk her ex Daniel at a bar. Issa took advantage of Molly's depression over being single and her coworker getting engaged as an excuse to go out, but it was all self-serving. Not only did Molly not even want to be out, but when Issa got the opportunity to freestyle rap, she publicly used the "broken p*ssy" phrase she had come up to describe Molly to win over the crowd — and completely mortified her best friend in the process.

While no one but Molly knew what Issa was referencing, her friend was understandably displeased. Of course, Issa was too busy riding the high of performing and reconnecting with Daniel to care too much and when Molly told her off about it, Issa even had the balls to text Daniel rather than give her friend her full attention.

But what makes these women true best friends is the way they spoke to each other and handled this fight. Molly wasn't afraid to call Issa out for being selfish and stupid and Issa wasn't too proud to crawl back to Molly with a bag of Cheetos (so clutch) in hand. Molly forgave her friend for being a jerk — after all, I kind of expect Molly has done something similar to Issa before — and these women showed that one misguided night out at the bar isn't going to mess with their friendship. Issa may not be the perfect friend, but she's still Molly's best friend no matter what and their friendship will be the hilarious heart of Insecure.