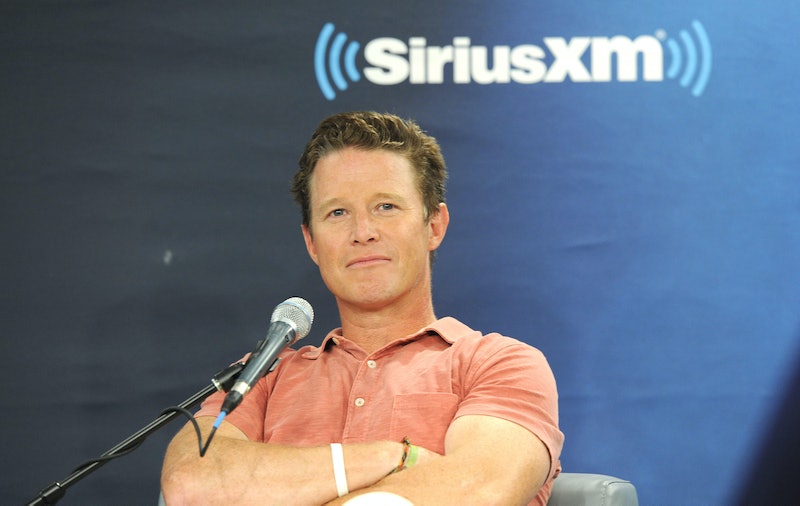 A video was obtained and leaked by The Washington Post revealing a lewd and sexist conversation with Donald Trump and a former Access Hollywood host. That host, Billy Bush, deleted his Twitter account after the video was released. Apparently, the pressure of the world knowing what you really think about women was too much for Bush.

It was a cowardly move for Bush, who so easily made comments about a woman being "hot as s--t" and enthusiastically responded to Trump after he bragged about his casual (and incessant) sexual pursuit of women. Trump told Bush that because he's a celebrity he can do whatever he wants — whether that's when Trump wants to "grab [women] by the p---y" or "just kiss" women without asking or waiting for consent. It's a disgusting way for men to even think about interacting with women that way, and hearing Trump and Bush say these things out loud made the entire conversation as lewd as I'd feared.

By deleting his Twitter account, Bush is quite literally hiding from his problems and trying to evade accountability for his (very sexist) actions. He was certainly not shy about participating in a crude conversation about women's bodies with Trump while he was on that Access Hollywood bus back in 2005; seems things have changed, and he's not as "manly" as he clearly believed himself to be in that video.

Yes, it was a cowardly move to delete his Twitter account, but honestly, I'm not sure whose response was worse. Bush made a clear statement by deleting his social media presence and running away from his problems. But Trump's official statement was an equally cowardly way of handling this whole thing.

"This was locker room banter. A private conversation that took place many years ago. Bill Clinton has said far worse to me on the golf course — not even close. I apologize if anyone was offended," Trump's statement read. If? So Trump is only sorry if anyone was offended. Huh. Considering he made comments that were clearly anti-consent and explicitly promoted sexual assault, I'm going to use my brain (one part of the female body that Trump and Bush weren't interested in) and guess that some people will certainly be offended.

I don't agree with Bush's decision to delete his Twitter account because he should take ownership of his nasty behavior, but I wouldn't mind if Trump took a page from his playbook and deleted his account, too.

Update: Billy Bush deleted his Twitter account in August, which was not known at the time of this writing.