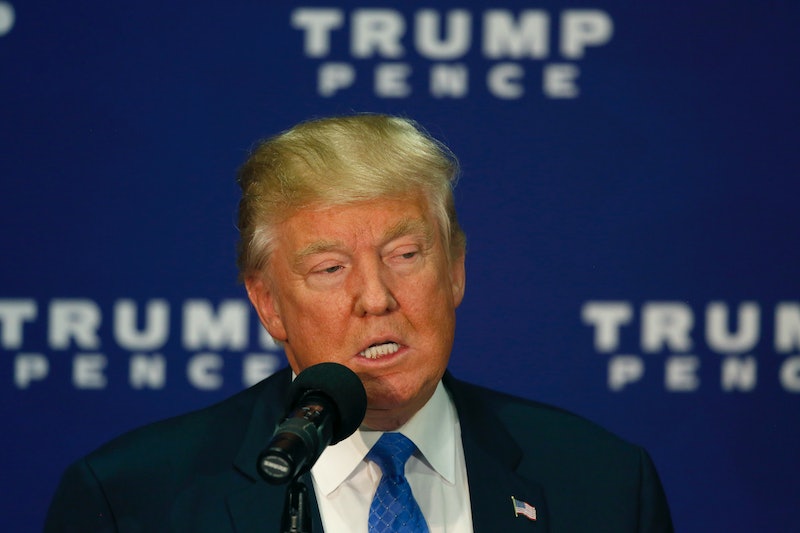 Every time Trump opens his mouth, I have a visceral reaction. He lies, he attacks, he insults everyone, so I've come to expect the feeling of utter disgust after he speaks. But the leaked Trump tape from 2005 wherein he describes grabbing women "by the p---y," kissing women without their consent, describing a human as "it" when commenting on her looks, and moving on Nancy O'Dell "like a bitch" (while Billy Bush laughs in the background like a spineless, frat boy lackey) left me frozen in place. These comments are ones that only a sexual predator would make, and they made me relive my rape all over again.

I was 17 years old, and I was drunk at a party. I was a virgin at the time. A guy I knew raped me that night. I don't remember most of it. But I do remember saying "no," to which he replied, "Shhh." I remember the blood on my underwear. It took me over a decade to admit to myself that the rape even happened. And it was just a few months ago that I shared my story with my loved ones, and also the internet. The pain from this event will never leave me. I can only hope it dulls over time.

Look, I understand that Trump's despicable comments were not about me. But I refuse to simply "not let him get to me." It needs to get to me. It should get to all of us. We cannot ignore this. I remember the shame and fear I felt when I realized someone else had taken control of my body — without my consent — and ignored my protests as he took what he wanted. The feeling of being powerless, as I was stripped of my identity and left as nothing more than an object, is an experience way too many women have in common, and we shouldn't be forced to relive that trauma by a presidential candidate.

Author Kelly Oxford created a Twitter thread in which women shared their own sexual assault stories.

She received thousands of responses. Why? Because Trump's comments triggered horrible memories for every woman who has ever been groped or worse.

It doesn't matter that these comments were made 11 years ago. Do you really think Trump has grown as a person since that day? He used his platform at a presidential debate to congratulate himself on insulting Rosie O'Donnell. His entire campaign is based on his ability to shock people. But these comments are beyond shocking. They're chilling. They're a sobering reminder that we've somehow allowed a predatory monster to get this close to becoming leader of the free world. We cannot allow that to happen.

Women are still being paid less than men for doing the same job. Rape survivors are shamed and left with nothing, while rapists like Brock Turner get a slap on the wrist, or worse, walk free to pursue their goals and explore their "potential." Young girls are forced to change their clothes so as not to be a "distraction" to boys who are trying to learn.

What will happen if Trump is not forced to do more than spew a half-assed non-apology on air (while also shifting the blame to Bill Clinton, and threatening to verbally attack Hillary Clinton in the coming days)? And even more terrifying, what if he actually becomes president?

His current lack of accountability shows the world that rape culture is here to stay. He and his supporters are brushing it off as "locker room banter," which sounds a whole lot like Dan Turner's "20 minutes of action" comment defending his son, Brock.

If we don't stop Trump now, it will be a slap in the face to sexual assault survivors everywhere. It will send a message that grabbing a woman "by the p---y" is just "boys being boys" rather than a graphic and violent sexual assault that should lead to jail time. This world does not need another Brock Turner. And we certainly can't have an older version of Turner (who has just never been prosecuted) becoming president of the United States. If that happens, America will never be great again. It will be a nightmare, and sexual assault survivors are already living in a nightmare that should never be perpetuated by the leader of our country.