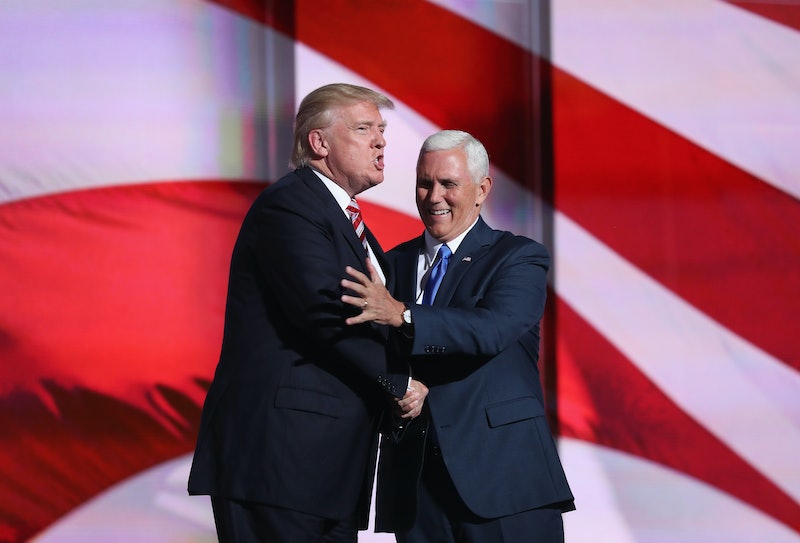 A video of Republican nominee Donald Trump bragging to former Access Hollywood correspondent Billy Bush about attempting to have sex with a married woman and feeling free to grab women "by the p---y" because he's famous has caused overwhelming controversy for the candidate. As condemnations of Trump's remarks continue to mount there have also been calls from GOP lawmakers for Trump to drop out of the general election race or step aside and let his running mate, Gov. Mike Pence, lead the ticket. But can the RNC really replace Trump with Pence?

In the fallout of the Trump tape, the Republican nominee has been urged to drop out of the election by multiple members of the Republican Party. Sen. Mark Kirk, Sen. Mike Lee, Sen. Ben Sasse, Sen. Mike Crapo, Rep. Mike Coffman, Rep. Barbara Comstock, Rep. Martha Roby, former New York Gov. George Pataki, and former Utah Gov. Jon Huntsman are all among those that have publicly urged Trump to step aside.

However, Trump has made it fairly clear he has no plans to do the Republican Party any favors by stepping down as the GOP nominee. "I'd never withdraw," he told the Washington Post over the phone on Oct. 8. "I've never withdrawn in my life... [there's] zero chance I'll quit." Even more bizarre is the fact that in a separate interview conducted that same day, Trump seemed completely oblivious to the growing calls for him to excuse himself from the presidential race. "[The] support I'm getting is unbelievable," he told the Wall Street Journal. So safe to say, we won't see Trump willingly give up his nomination to Pence, but could the RNC force Trump from the presidential hot seat?

As the GOP reportedly has no procedure currently on the books to remove an unwilling candidate from the ticket, a forceful takeover of the ticket would be not only unprecedented, but highly improbable. "The RNC rules allow for replacement of a candidate on death or declining the nomination, but no provision for replacing," lawyer Ben Ginsberg told NPR's Politics Podcast. "At this stage, Donald Trump would have to resign. There's no way to stage a coup." Moreover, ballots have already been printed, and in some cases, votes have been cast, thus making it impossible to wipe Trump's name from them.

Presumably, Republicans could attempt to force a flipped ticket on Trump by invoking Section 4 of the 25th Amendment, which allows for the vice president — with the support of Congress and the Cabinet — to declare the president "unable to discharge the powers and duties of his office" and take over. It is not specified what or how a president is deemed unable to complete the duties of office, but so as long as Pence maintained the support of two-thirds of both the House and the Senate, he theoretically could remove Trump as president (allowing, of course, that a Trump-led GOP ticket managed to prevail at the ballot box).

While Pence has not yet acknowledged the growing calls for him to replace Trump as the GOP's headliner, he has expressed his continued support of Trump ahead of Sunday's presidential debate.

It would be highly unprecedented for the RNC to replace Trump with Pence just 30 days before the election, as no presidential candidate from either the Republican or Democratic Parties has ever been replaced after securing the nomination in the primaries.