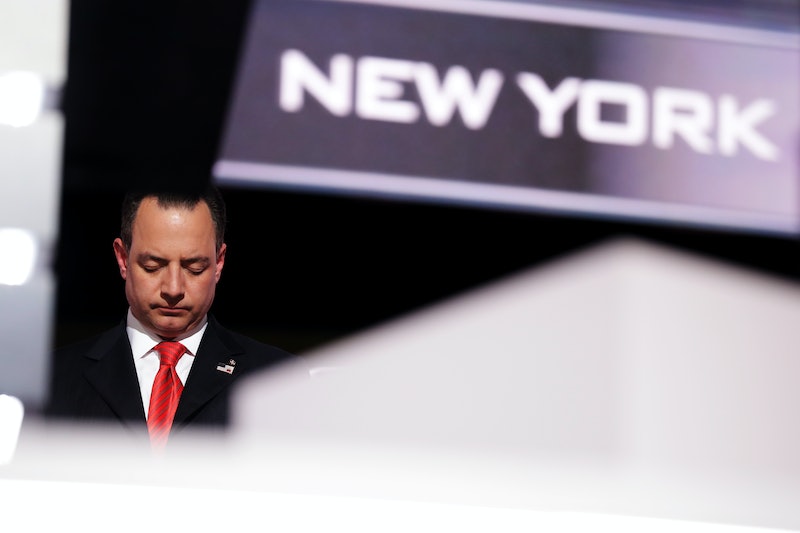 In light of the fallout from the lewd Trump tape, the Republican National Committee has reportedly put a halt to all "Victory" project work for Trump as lawyers look into the party's options for replacing Donald Trump as the nominee one month before Election Day, Politico has reported. The RNC has yet to comment on Politico's reports, which cite an email sent to a victory program mail vendor by RNC political staffer Lauren Toomey and an anonymous "Republican operative."

The RNC's decision to bring the pro-Trump victory campaign to an at least temporary halt comes amid growing calls from fellow party members for Trump to drop out of the presidential race following the leak of a taped conversation between him and former Access Hollywood correspondent Billy Bush in which the Republican nominee makes degrading and lecherous comments about women. "Please put a hold/stop on all mail projects right now," Toomey reportedly wrote in an email obtained by Politico with the subject line "Hold on all projects." "If something is in production or print it needs to stop," the message also read.

It is unclear if the move is an effort by the RNC to cut off support for Trump or merely pause and rethink campaign messaging given the turbulent weekend. Indeed, Trump's latest gaffe seems to have wedged the party firmly between a rock and a hard place. As GOP leaders consider whether defending Trump at the risk of harming down-ballot Republicans (not to mention the party's overall reputation) is more beneficial than pulling a sharp 180-degree turn away from Trump at the risk of panicking GOP voters. Some RNC staffers have reportedly walked away from pro-Trump campaign duties out of "disgust," according to Business Insider.

According to Politico, the RNC is reportedly looking into how it can "reevaluate its strategy," with lawyers allegedly investigating Rule 9 and any other potential legal avenues that would allow them to remove Trump as the GOP nominee. "RNC has an army of lawyers right now looking at Rule 9 and ballot questions," an unnamed Republican strategist reportedly told Politico, adding that current procedure only allows for filling vacancies created by death or voluntary withdrawal. "The fact remains that he can only be replaced if he quits or dies. And he's declared today he’s not planning on doing either."

News of the RNC's alleged "reevaluation" comes as several Republican lawmakers call for Trump to remove himself from the presidential race.