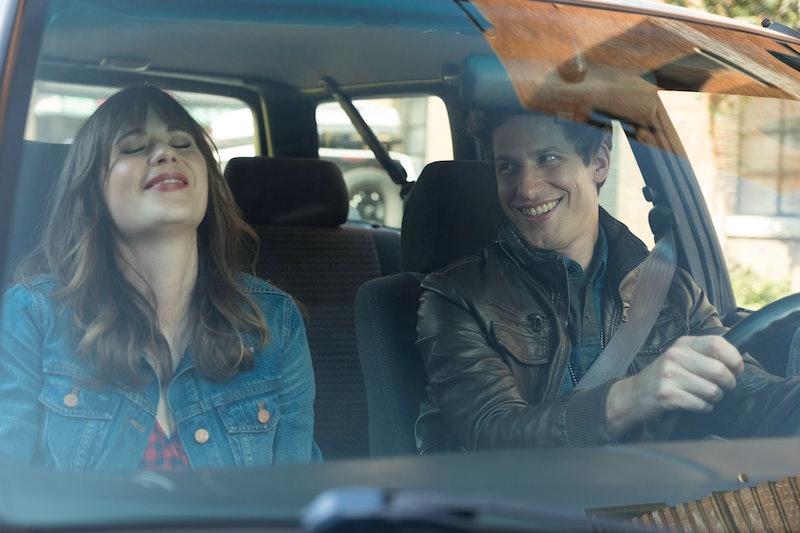 After teaming up to finally take down notorious crime lord Jimmy Figgis last week, the whole Brooklyn Nine-Nine gang was finally back together again in Tuesday night's new episode. Nine-Nine! But their celebration was cut short when Captain C.J. punished the squad by forcing them to work the night shift after disobeying his orders to not go down to Florida to help Jake and Captain Holt. Luckily, Jess Day appeared to help Jake and liven things up in part one of this highly anticipated Brooklyn Nine-Nine and New Girl crossover episode. But I'm getting ahead of myself.

As I mentioned, morale was incredibly low in the 99th Precinct as the squad we know and love worked the very unglamorous night shift. Terry became "night sassy" and Rosa was none too pleased to only have drunk and disorderly cases to deal with. But at least Gina seemed more than happy to be entertaining an Aussie audience with her tweets since it was normal awake hours for them.

A newly frosted tips-less and injured Jake (he had to walk around with a cane since Amy shot him in the leg in last week's episode) hoped to get his mojo back by solving his first case back in New York. He and his trusty partner in law Charles teamed up once again, this time dubbing themselves the very salacious-sounding Night Boys, to investigate a jewelry store burglary. After encountering bumps along the way in analyzing the DNA on a cigarette butt left at the scene of the crime and tracking down the perp's file, Jake and Charles eventually found the identity of the suspect.

But the glacial pace in which Jake and Charles were able to solve a case now in the night shift wasn't the only major change upon Jake's return to the Nine-Nine. Charles is now the proud papa of adopted son Nikolaj, which Jake is obviously happy about from a personal standpoint. However, the fact that Charles' priorities have shifted now that he's a dad, such as the fact that he wasn't able to leave his son home alone in order to track down the robbery suspect with Jake at a moment's notice, started to cramp Jake's style in the usual fast-paced and exciting world of police work.

And that brings us to the Brooklyn Nine-Nine and New Girl crossover part of the episode — finally! Jake decided to arrest the suspect on his own, which proved to be easier said than done since he had that aforementioned cane and leg injury. So when he ran into the perp, the perp ran away, and Jake tried to chase him, to no avail. Luckily, he ran into Jess in that moment as she drove Schmidt's mom's car down the street. "It's a crossover!" Jess yelled at Jake upon meeting him, in an obviously very self-aware moment about how random and artificial crossover episodes can be, before clarifying, "It's a crossover SUV, and you can't have it."

Jess eventually acquiesced after Jake proved to her that he's a cop when he successfully named one law ("Don't kill people."), but she was not happy about it at all. During the chase, L.A. lady Jess managed to throw a ton of shade at New York City, and all she could care about was not spilling her soup, which unfortunately happened when they crashed into a garbage truck and the perp got away. Jess still thought her thing was worse, though.

However, what this episode lacked in crossover, it made up for in character development among the Brooklyn Nine-Nine crew, particularly with Jake and Charles and their beloved friendship. Jake eventually realized that things have changed during those six months he was in Florida, and they're changing for the better, with Charles growing up, starting more of a life of his own instead of always living vicariously through Jake's happiness, and becoming, well, happy. But the fact that Charles did something like get frosted tips to be just like Jake in the cold open of this episode shows that the zany and loving times these two pals share will always be there.