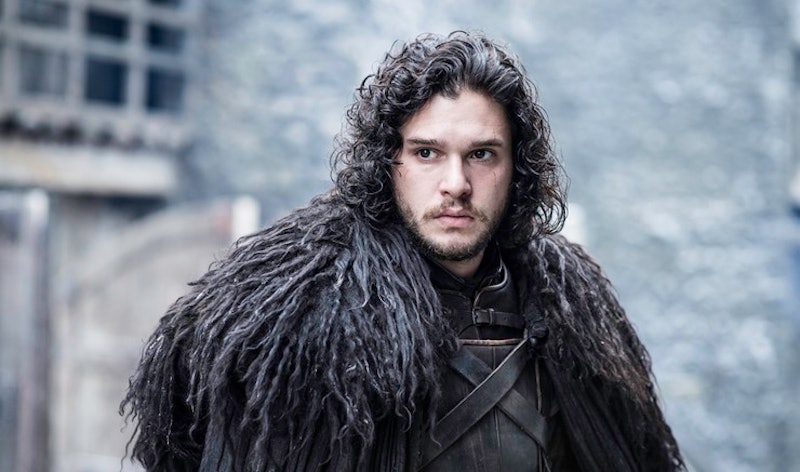 There is a new actress on the Game of Thrones set who is stirring up all kinds of Season 7 theories. Megan Parkinson has appeared in on set photos wearing simple Northern garb alongside the likes of Gwendoline Christie, Liam Cunningham, and, most importantly, Kit Harington. Given her attire and the company she is keeping, Watchers on The Wall is speculating Parkinson's could be playing Jon Snow's new love interest. After all, Jon is now a king, which in the world of Westeros means he needs a queen by his side.

Early reports indicated Parkinson may have been Sansa's (Sophie Turner) body double, but given both the character's clothes and her penchant for walking around with a sword on her hip, it seems unlikely she is standing in as Sansa. Besides, Parkinson is an up and coming actress herself with two TV movies set to air soon. Game of Thrones could be her big break, especially if she is playing a key role in Season 7.

Thanks to her red hair and ability to handle a sword, the mystery woman Parkinson is playing seems like a perfect fit for Jon. The similarities to Ygritte are striking, but that does not automatically mean this new character is going to be crowned Queen of the North. Here are just a few roles Parkinson could play in Season 7.

After Robb beheaded Rickard Karstark, the once loyal Northern house of Karstarks has turned away from the Starks. Rickard's last living son even threw his army behind Ramsay in the Battle of the Bastards, but that only makes the prospect of book character Alys making an appearance on the show all the more real. In A Dance with Dragons, Rickard's daughter Alys flees her uncle and his plans to marry her off to her cousin, and heads to The Wall in hopes Jon will help her. Jon's solution is to marry Alys to a wildling and create a new house in the process.

Alys could similarly break ties with what is left of her family on the show and seek out Jon for help in breaking an unwanted marriage alliance. She and Jon could even marry to increase the legitimacy of his claim as King of the North, which could put a strain on Jon and Sansa's fragile relationship if she feels she is being pushed out of her leadership position.

Since Joe Dempsie was spotted on the Season 7 set, there's a popular theory that Gendry will finally return to the fold after several seasons spent rowing aimlessly around Westeros. If Gendry does return, Willow Heddle may be with him. According to Watchers on the Wall, a casting notice for a young Northern girl was sent out in June, along with a notice for a 10-year-old Northern boy. Both characters are supposed to be involved in "a high-stakes scene with leading cast members."

This should catch the attention of book readers who will remember Willow, who sets up an orphanage of sorts with the help of Gendry and the Brothers Without Banners. Brienne intervenes when the Brave Companions attack Willow and her band of parent-less children, and is ultimately saved by Gendry. Introducing Willow and the children to the show could be one way to fold Gendry into Jon's camp, and it is the perfect excuse for a cool action sequence too.

If Arya craves a reunion with her family, but knows she cannot stay with them until all the names are crossed off her list then she may come to them with someone else's face. This mystery character could be another one of Arya's disguises, only this could be the one she wears to gain entry to Winterfell to reunite with her brother and sister without their knowledge of who she actually is. The idea is heartbreaking, but also completely in the realm of possibility in the world of Game of Thrones.

The only thing that is certain about Parkinson is her scenes will take place in the North. She could be playing a character who is entirely new for the show. She could be a wildling who has not been introduced yet, or a Northern girl from a house loyal to the Starks who truly is destined to marry Jon (assuming Jon decides to adhere to societal pressures to hold his claim). At this stage, Parkinson's character is a major question mark, but she is sure to play an interesting role in Season 7.

Whether she is Jon Snow's next great love or Arya in disguise, this new character is already intriguing.