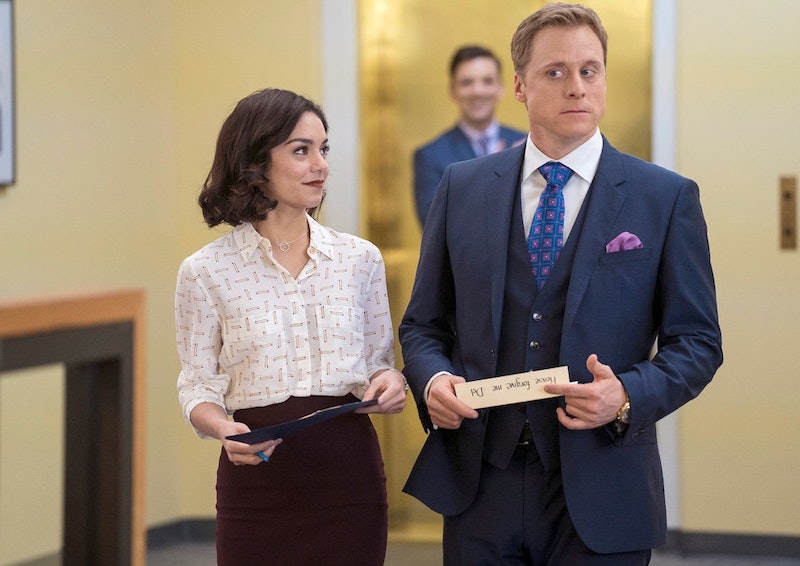 Superheroes are dominating screen time lately, be it in movie or TV form. And, while Marvel is making big moves in the television landscape with its ever-increasing Netflix universe, DC is looking to make TV waves too — but it's sticking to network. In May 2016, NBC picked up Powerless, a workplace comedy about regular people living in a DC superhero world. It follows regular employees at an insurance firm who just so happen to be surrounded by people with powers. How do they cope with being everyday humans in a world filled with supernatural beings? We'll have to tune in to find out. Unfortunately, the Powerless premiere date has not yet been announced, and star Alan Tudyk explained why during a New York Comic-Con panel attended by Bustle. His answer was.... colorful to say the least.

"It was always a mid-season replacement, so you have to have something fail for us to live," he told the audience. "Sort of like something that feeds off its host and lays its eggs in there and once the eggs hatch, it kills that TV show ... somebody has to die for us to succeed."

Colorful metaphor aside, Tudyk was quick to reassure fans that Powerless "is coming" it's just "sort of in a holding pattern." And, when there is finally space on the network to air the show, he teases that "DC has never done a comedy before, so they're really excited about it ... the pilot was really fun."

As much as I love a traditional superhero story, I am intrigued by this telling of the other side of the coin. After all, I can't really relate to a super powerful alien being, but I can relate to a totally normal human who just happens to exist in a really weird world. (2016 may not have superheroes, but it definitely has supervillains, so I get it.)

Tudyk stars in Powerless alongside the likes of Vanessa Hudgens, Danny Pudi, and more, so it's going to be seriously good and seriously funny whenever it does finally hit the schedule block — and I can't wait.