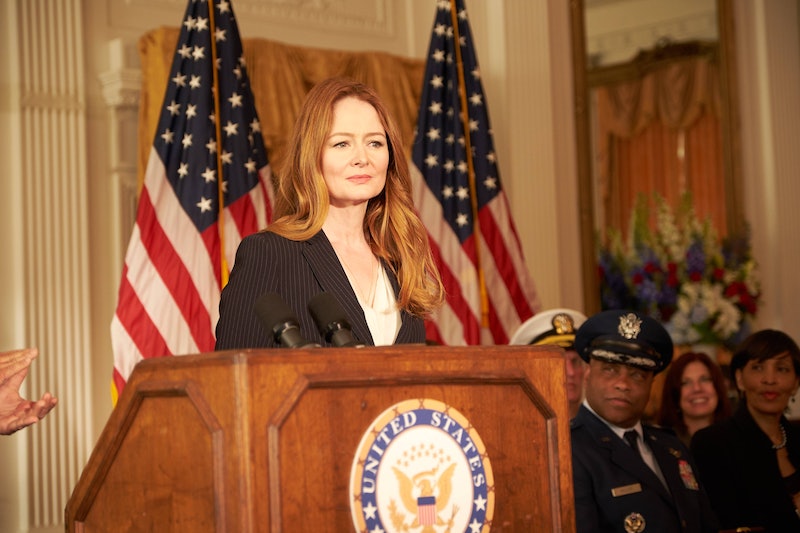 When most people think of 24, they likely think of two things: its signature ticking clock and Kiefer Sutherland. When the 24 reboot, 24: Legacy, premieres after the Super Bowl on Feb. 5, the former will be present, but as we far know, Jack Bauer won't be taking down any terrorists on this particular day. However, an extended look at the 24: Legacy pilot shown at New York Comic-Con proved that there will be more than enough new, engaging characters for viewers to follow, including two women whose own capabilities are highlighted early in the reboot.

In addition to Straight Outta Compton's Corey Hawkins, who plays new lead character Eric Carter, 24: Legacy stars Miranda Otto as Rebecca Ingram, the former head of the Counter Terrorist Unit who is leaving her role to support her husband (Jimmy Smits' John Donovan) as he runs for President. That description may not sound ripe for a feminist character, but the footage shown at NYCC showed that Rebecca will take a central role in this story, and that her relationship will in no way define her. As one 24: Legacy producer said during the panel, Rebecca and John are "two very ambitious people" who need to "manage how to be ambitious in this relationship."

Without getting into any specific spoilers, the pilot footage shows Rebecca struggling to let her job go and her attachment to the CTU demonstrates both her passion for her career and how she excels at it. Even before things start to get intense for the CTU as the main plot unfolds, it's made clear that Rebecca won't be stepping into her husband's shadow. We're introduced to her as she's set to receive an award for leading the effort to take down a terrorist ring, and before she goes on stage to accept it, John chooses to stay backstage, so that it rightfully remains her moment.

Later, Rebecca reveals that her husband had previously placed his career on hold so that she could focus on her own, and she's only stepping back because now, it's his turn. As Smits described it at the NYCC panel, "you have this couple that are very prominent in what they're doing, a strong female character, proactive in every sense of the word, stuck in this situation with the clock ticking ... and the dynamic between them is just trying to keep it real and honest and conflicted." By taking the time to reveal this information in the pilot, 24: Legacy is able to give more depth to their relationship and show that though we're meeting her in a transitional period, Rebecca puts her career first.

While we don't get to know her as well, the 24: Legacy pilot introduces Anna Diop as Nicole, Eric's girlfriend, who is also able to show off her capabilities early in the episode. Unlike Rebecca, Nicole is a nurse and doesn't appear to be connected to the CTU or the series' central plot, but rather than resign her to the sidelines as solely a love interest, the premiere points toward her background as well. Again, without getting into spoilers, Nicole proves that she can more than hold her own in the face of danger, even without the training that Eric has. As we get more information about her history and how her relationship with Eric started, Nicole only becomes more interesting and even if she won't be battling terrorists alongside her boyfriend and Rebecca, I'm sure her storyline will be compelling.

Whether 24: Legacy capitalizes on the potential of these women shown in the pilot remains to be seen, but so far, the series seems to be off to a good start.