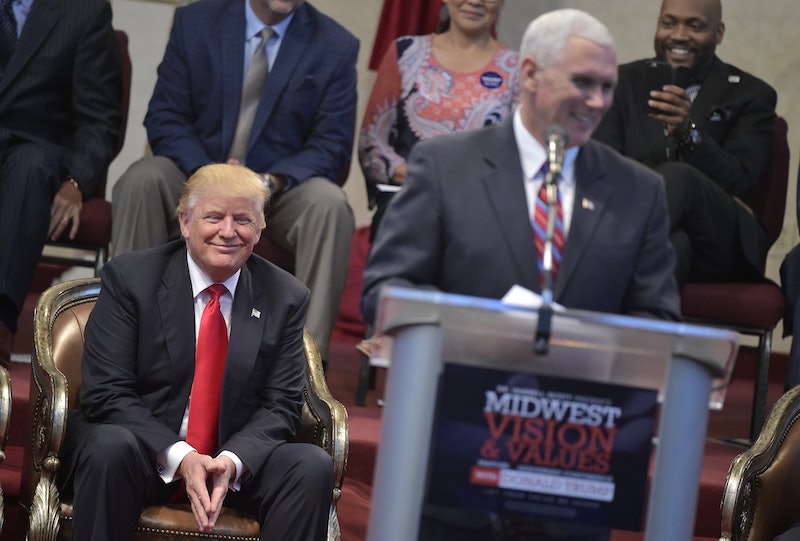 Political fortunes change fast these days: Just 48 hours ago, the question on everyone’s mind was whether Donald Trump could come back from behind in Sunday’s upcoming debate. Now the question is whether Trump’s candidacy will survive the weekend. But for those who think that VP nominee and theoretical Trump-alternate Mike Pence is the palatable, middle-of-the-road alternative to the Donald, don’t forget: Pence is still a hypocritical, anti-feminist, homophobic monster.

With the game-changing release of a 2005 recording of Trump making vulgar and offensive comments about women, many Republicans have pulled their support for their party’s nominee, and several have suggested that Pence take the top of the ticket. While this might be thought of as a magical (and perhaps long-sought) fix to the party’s Trump problem, it doesn’t solve the GOP’s problems with many of the demographics that suffered from Trump’s hateful bombast.

Among the first to jump Trump’s ship was Sen. Kelly Ayotte (R-N.H.) who tweeted early Saturday morning that she would not be voting for Trump; instead, she insisted she would write in Pence's name. Ayotte is in a tight race to hold on to her seat in New Hampshire, a mere 2.3 points ahead of Democratic challenger Maggie Hassan in the latest RealClearPolitics polling average.

“@KellyAyotte and Mike Pence are craven, self-interested, amoral bigots. They deserve each other,” he concluded.

All of this is in addition to the 90 minutes he spent in the VP debate slithering round the positions of his running mate, in what many are calling a national gaslighting.

The GOP is up against a wall, and they’re grasping at straws; it makes sense that they’d grasp at Pence, the last Republican on the national stage not to make an utter fool of himself. Even so, don’t be fooled for a second: Pence is no less a turd than Trump, he’s just more polished.