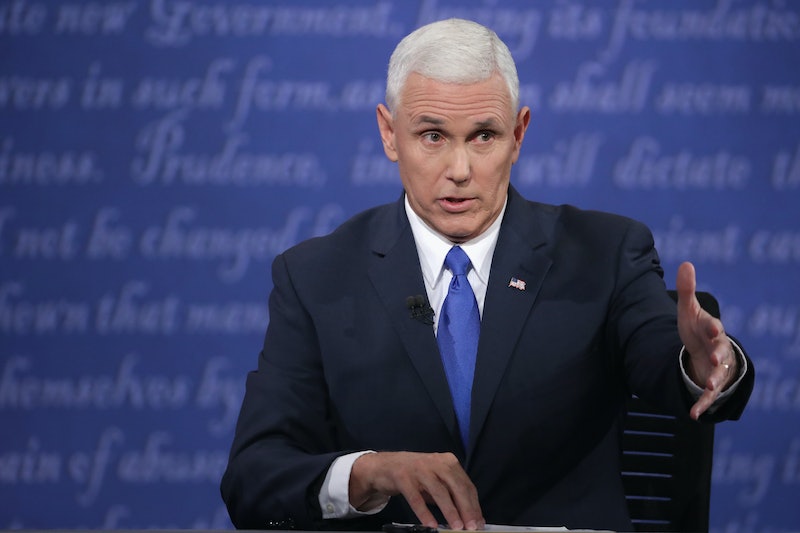 This week's episode of Saturday Night Live kicked off with a sketch on Tim Kaine and Mike Pence's vice presidential debate, and SNL cast member Beck Bennett's version of Mike Pence proved to be just as scary as the real thing. Bennett's Pence, complete with his normal grimace and silver hair, pulled off the VP's usual denial tactics without a hitch. His go-to "Donald Trump has never said any of those things" should sound familiar to voters at this point.

Bennett imitated Pence perfectly — and it wasn't just the cast member's similar mannerisms or annoyed looks at Kaine's constant interruptions that sealed the deal. Rather, it was Pence's fondness for denial that Bennett captured so well. Just like in the real debate, Bennett wouldn't accept the moderators' facts as truth.

Have a clip that clearly illustrates Trump's opinions on a topic? Well that doesn't matter — Trump never said those words, and chances are, Pence has a better (read: slightly less insane), more by-the-book conservative take on the matter. This seems to have become the preferred back-and-forth between the nominee and his VP candidate: Trump says something completely off-script, and in the case of the debate and elsewhere, Pence is able to come in and clean up.

But after the week Trump has had, it looks like even Pence may be wanting to pull the plug on their partnership. In light of Trump's vile remarks leaked this past week, in which he says his star power allows him to "grab women by the pussy," Pence has started to back off. In a statement, Pence said of the remarks: "As a husband and a father, I was offended by the words and actions described by Donald Trump in the 11-year-old video released yesterday. I do not condone his remarks and cannot defend them."

Now, several top GOP officials are calling on Trump to drop out of the race. Their pick for his replacement could be Pence. But as Bennett illustrated in this weekend's episode of SNL, Pence is in no way less terrifying than Trump.

His consistent state of denial, coupled with the fact that voters already have seen much of Trump's beliefs put into practice by Pence, should be enough to scare people away. Lifting Pence up as Trump's replacement isn't any less terrifying than having the man himself. If Pence's most notable asset is denial, then choosing him as a potential replacement for Trump would be the GOP's mistake to make.