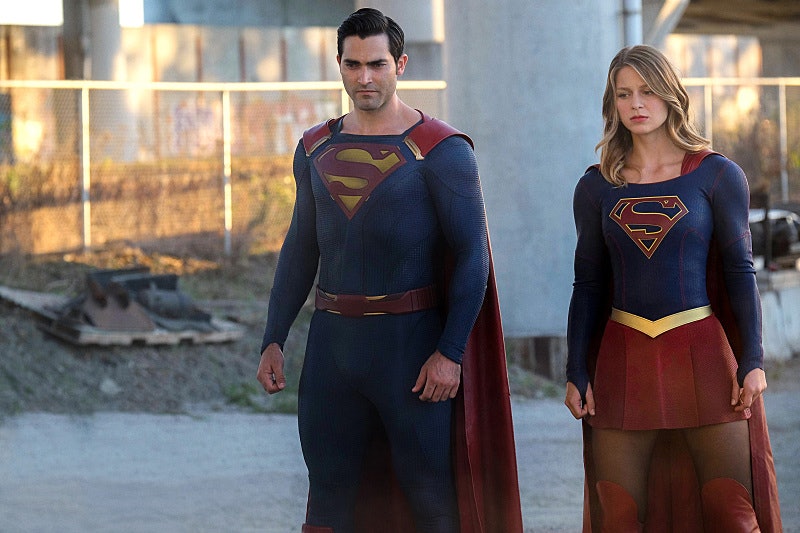 Supergirl viewers will finally get to meet Kara's cousin in the Season 2 premiere — I think you might have heard of him, his name is Clark Kent? Since the two heroes will undoubtedly team up soon, it's important to understand Superman and Supergirl's powers and how they'll take down the latest threats to National City. Will Kal-El have something to teach his younger relative about being a hero? Or does Kara have a few tricks up her sleeve to show him?

Supergirl actually had two different identities in DC Comics, the Kryptonian Kara Zor-El, and the human Linda Danvers. The version adapted for Supergirl is Kara Zor-El (though she was adopted by the Danvers family), and according to the comics, Kara and Superman, Kal-El, have a very similar set of powers. Both of the Kryptonians are affected by Earth's yellow sun, and thus are much stronger and more powerful than the average Earthling.

Most of their differences stem from the fact that in this timeline, Kara is much younger and less experienced than her cousin. While he has complete control over his powers, she's still figuring it all out. It's not easy being a twenty-something trying to work your way up at a magazine, let alone one who's trying to figure out how to be a good vigilante at the same time. But as you'll see, Superman and Supergirl share many abilities that should help them save the day in National City.

Used for picking up super heavy objects, both of these heroes are given the power of incredible, inhuman strength by the yellow sun around Earth.

Useful for when a car hits you or an enemy catches you off guard, these heroes can't be hurt — remember the one iconic moment from Superman Returns, when a bullet bounces off of Superman's eyeball?

If need be, both Kara and Clark can turn their eyes into super-focused heat beams. It's not totally clear how they control it, but the heroes often use it to slice into something being used by the bad guys. Usually, these beams are shown as red, but Supergirl has given them this glowing, blueish white light.

And as a flip on the heat vision, Superman can has freeze breath as well, which can, well, freeze things. We haven't really seen Supergirl use this often on the show, but it's an established part of Superman's power set, especially in movies, so I wouldn't be surprised if Kal-El inspires Kara to start trying it out.

The ability to move super quickly comes in handy while running to catch someone who's up to no good.

There is no power more appealing than the ability to fly. It's awesome that Supergirl has the budget for the character to fly in most episodes, because it's a crucial one. It's the origin of the most famous line about her Kryptonian cousin: "It's a bird! It's a plane! ...It's Superman!"

As you can see, Supergirl and Superman share basically all of their powers. There are some slight differences in which powers they prefer to use — Supergirl doesn't punch and hit quite as much as the current DC movie Superman, for instance — but overall, they make a formidable team.