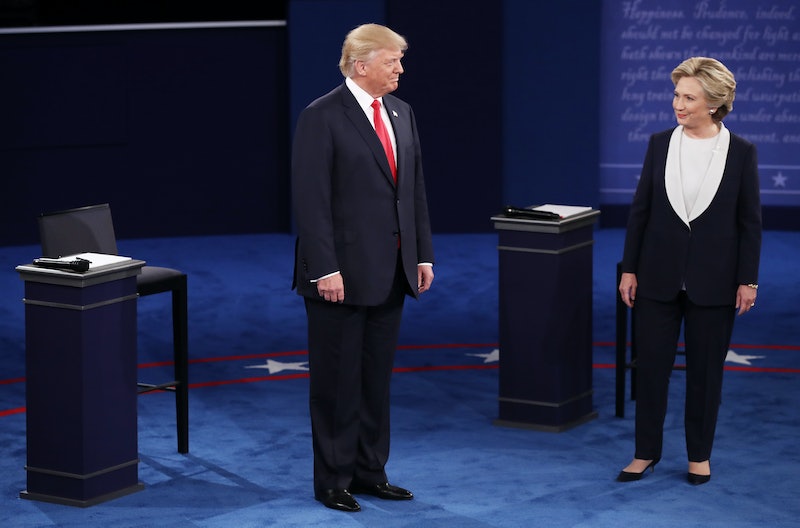 Ahead of the second presidential debate, which took place on Sunday night at Washington University in St. Louis, Missouri, Trump dominated the weekend news cycle because of inappropriate comments he made about women in 2005. A recording of the conversation was released by The Washington Post and the public waited anxiously to see the recording's impact on Sunday's debate. All this to say, Donald Trump may have lost Sunday's presidential debate before it even started.

The backlash from Trump's comments in the recording was far-reaching and widespread, even within the Republican Party. For instance, colleagues as close to Trump as vice presidential nominee and Indiana Gov. Mike Pence expressed disgust with Trump's 2005 comments. Meanwhile, both members of the Democratic ticket, former Secretary of State Hillary Clinton and Sen. Tim Kaine, expressed concern with Trump's comments.

Heading into Sunday's debate, the 2005 recording wasn't the only thing looming over the Republican nominee. According to polls, Trump largely lost the first presidential debate to Clinton. During that face-off, Trump boasted that he had a better temperament than Clinton, and he attacked Clinton's "look" — er, "stamina." For her part, Clinton stayed true to her message and fired back at Trump for his sexist comments about women. That same attitude was largely expected from Clinton on Sunday, and she delivered.

Sunday's debate took a different form than the first presidential debate. Although both showdowns put the candidates in a 90-minute nonstop situation, the second debate took the form of a town hall. A series of uncommitted voters asked questions of the candidates, with some questions from the moderators in between. Still, the interruptions flew fast and furiously, and mostly in one direction, with Trump repeatedly interrupting Clinton. Moderator Anderson Cooper even scolded him on more than one occasion.

When it came to the topic of Trump's comments in the 2005 recording, the Republican nominee took an expected route. "Nobody has more respect for women than I do," Trump said. He also tried to turn the issue into talk of national defense. "Yes, I'm very embarrassed by it... I will knock the hell out of ISIS." If you're confused by the transition, you're not alone.

Much of Trump's debate performance on Sunday mirrored his performance in the first presidential debate. In the first debate, Trump criticized Clinton for her attacks of him, priding himself by saying, "I was going to say something...extremely rough to Hillary, to her family, and I said to myself, 'I can't do it. I just can't do it. It's inappropriate. It's not nice." Meanwhile, in Sunday's second presidential debate, Trump patted himself on the back again for bringing something up by claiming not to bring it up.

She also sent out a tweet at 3 in the morning, but I won't even mention that.

Trump's repeat debate performance on Sunday showed that two wrongs do not, in fact, make a right. He went into the debate with increasingly high stakes after the published recording of his 2005 comments about women. Despite all the negativity during the debate, things ended on a pleasant note, with each candidate saying something nice about the other. Clinton complimented Trump's children, and Trump complimented Clinton's "never give up" attitude. If only those sorts of pleasantries could continue beyond the debate stage.