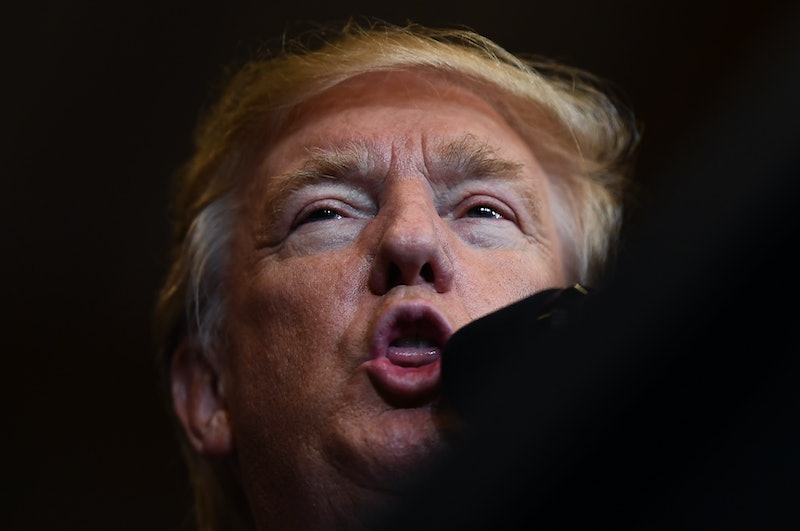 Trump has used sexist arguments against Clinton in the past, but this may have been the most obvious gendered critique of her candidacy so far. Toward the end of the first presidential debate, which took place at Hofstra University in New York on Monday, moderator and NBC Nightly News anchor Lester Holt asked Trump to clarify a statement in which Trump had referred to Clinton's "look." Trump quickly replaced the word "look" with "stamina," but that didn't make his argument any less obvious. This is, after all, the man who said of former opponent Carly Fiorina, "Look at that face. Would anyone vote for that? Can you imagine that, the face of our next president?"

"You have so many different things that you have to be able to do," Trump said, redirecting his comments to talk about the rigors of the POTUS gig. "I don't believe that Hillary Clinton has the stamina."

For her part, Clinton clearly knew that Trump was trying to implicate her gender in the argument. She called him out on it — and she showed, based on experience, that she can multitask, negotiate, and work tirelessly as a woman. It's an argument she shouldn't have to make, but she has probably become used to it at this point.

"As soon as he travels to 112 countries and negotiates a peace deal... or even spends 11 hours testifying in front of a congressional committee, he can talk to me about stamina," Clinton fired back. "He tried to switch from looks to stamina, but this is a man who has called women pigs, slobs, and dogs."

She didn't stop there. Clinton went on to tell the story of a woman who had previously appeared in one of Trump's beauty pageants, saying that Trump had said degrading things to her. Clinton claimed that Trump had referred to her as a housekeeper because of the woman's Hispanic heritage. She drove home the point that Trump disrespects women, and his digs on her appearance only confirmed it.

Trump dug up things from Clinton's past, as well. In addition to criticizing his opponent's gender, Trump claimed that Clinton had supported trade agreements like NAFTA and that she had not handled foreign policy appropriately during her time as secretary of state. Of course, he also brought up those emails. All in all, the debate was a highly contentious he-said-she-said event. Trump took things to a not-unexpected low in referencing Clinton's "look," but she didn't back down from any of his insults. The conversation ended abruptly, but it will undoubtedly continue at the next debate on Sunday, Oct. 9.