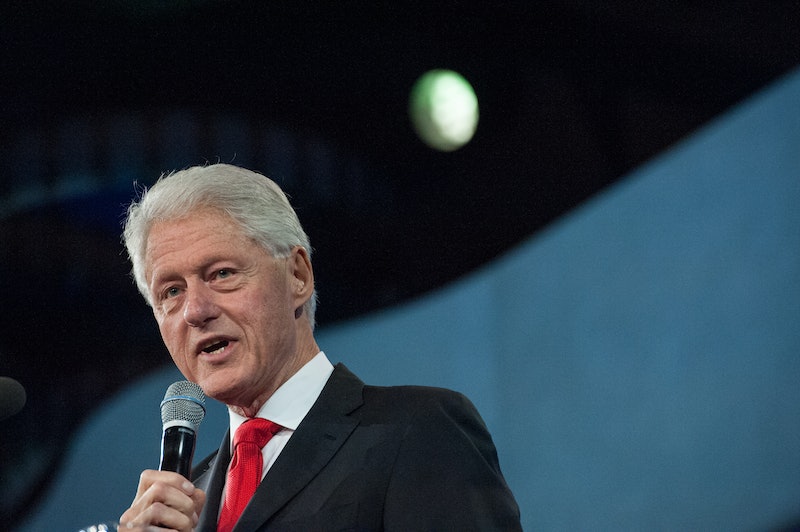 Prior to the second presidential debate, Donald Trump held a press conference with women who have accused Bill Clinton of sexual assault or rape. Bustle has reached out to the Clinton campaign for comment on the allegations. The event came just days after The Washington Post released a recording of Trump making lewd comments about women. And as the recording continues to tarnish Trump's already poor reputation among American women, expect the GOP nominee to focus on the alleged sexual advances of his opponent's husband.

While it does nothing to draw attention away from Trump's own treatment of women, at least four different women have indeed accused Bill Clinton of either sexual harassment, assault, or rape. One of the most known sexual assault allegations against Clinton dates back to 1978, when nursing home administrator Juanita Broaddrick alleges that Clinton raped her in a hotel room. Though Broaddrick and Clinton — who was Arkansas' attorney general at the time — had planned to meet for coffee, Clinton allegedly suggested that they move elsewhere to avoid large crowds. Following Clinton's impeachment trial over two decades later in 1999, Broaddrick recounted her allegations aloud for the first time in an NBC Dateline interview. In the interview, she described the alleged rape:

I kept telling him no. I don’t want this at all. You must have had the wrong idea. And he wouldn’t list… and he grabbed me again very forcefully and started biting on my top lip. And this was extremely painful. I thought he was going to bite my lip off. And that’s when he pushed me back on the bed…

Clinton denied the allegations and no charges were brought against him.

In a 1998 deposition, former White House volunteer Kathleen Willey alleged that Clinton had groped her in the Oval Office in 1993. Clinton denied her allegations and no charges were brought against him. Then, in 1994, another woman named Paula Jones claimed that Clinton had led her up to his hotel room in Arkansas three years prior and exposed himself to her. Clinton denied the claims under oath but agreed to an out-of-court legal settlement of $850,000.

Each of these three women was present at Trump's pre-debate press conference on Sunday. However, Eileen Wellstone, whose allegations date back to the 1960s was not there, and has asked for privacy from the public since making the claims. According to a retired State Department employee, Wellstone alleged that Clinton sexually assaulted her in 1969 while he was a student at Oxford University. Later, Clinton admitted to having had sexual relations with her, but insisted that it was consensual.

If the allegations are in fact true — as Trump hopes they are — one man's wrongs cannot justify another man's wrongs or somehow paint them in a less serious light. Still, expect to hear more about these allegations as the election season continues and Hillary faces off against Trump once again.

More like this
Watch Jacinda Arden’s Devastatingly Honest Resignation Speech
By Sam Ramsden
What The UK Blocking Scotland’s Gender Recognition Bill Means
By Sam Ramsden
25 Inspiring Quotes From Black Women To Celebrate Black History Month
By Kyli Rodriguez-Cayro and JR Thorpe
24 History-Making Black Women You Probably Didn't Learn About In School
By Ayana Lage and JR Thorpe
Get Even More From Bustle — Sign Up For The Newsletter
From hair trends to relationship advice, our daily newsletter has everything you need to sound like a person who’s on TikTok, even if you aren’t.