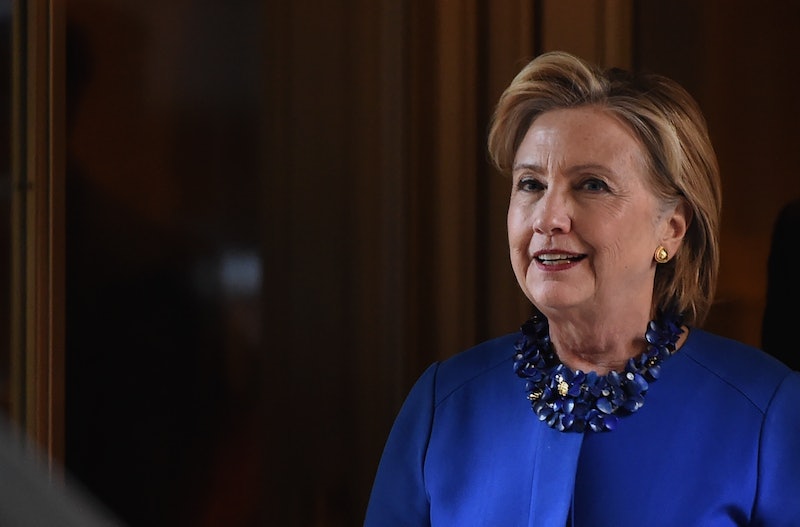 Well, that settles that. After hours of pre-debate speculation, the big moment finally arrived, and the candidates dispensed with the pleasantries ― there was no handshake before the second presidential debate. It probably shouldn't come as much surprise, of course, considering what's been swirling in the news for the last 48 hours, after the release of hugely inflammatory footage of GOP nominee Donald Trump boasting about kissing women and grabbing their genitals without consent, and after Trump held a press conference with women who had accused Bill Clinton of assault.

But still, it was an open question whether Clinton would take the step of declining the basic, introductory show of respect that traditionally kicks off presidential debates. It was a loaded situation, from a strategic standpoint ― do you play it cool and follow the script, or make it clear from the outset that your opponent is in for a contentious, rhetorical bare-knuckled brawl?

Well, Clinton clearly made her choice, giving Trump a major-league snub to kick off their second showdown. You can see the moment in the gif below ― rather than reach across for a handshake, the two simply stood in front of the audience, hovering awkwardly for a moment before heading to their podiums.

The question, of course, will be how any prospective voters felt about the moment. Needless to say, it's a pretty overt show of disrespect, although if there was ever a time to signal some disrespect, this might have been it. It was fairly clear that the tenor of the debate was set by that decidedly testy introduction, to boot ― the tone and substance so far has been incredibly caustic, including Trump promising to appoint a special prosecutor to investigate Clinton if he's elected, and quipping that she'd "be in jail" if he ever made it to the White House.

This, suffice to say, is a pretty shocking brand of rhetoric to see in an American presidential election ― would-be leaders generally refrain from promising to see their opponents throw in jail, at least within the context of American democracy.

But that's where the debate seems to be right now, and that (among so many other examples) is why it's really no surprise that Clinton wouldn't be all that interested in shaking Trump's hand. In short, it'll be interesting to see what the post-debate polls say about the winners and losers in this high-stake debate. In fact, that's probably an understatement.